AL-AFKAR #14: IS THERE A FEMALE PROPHET? 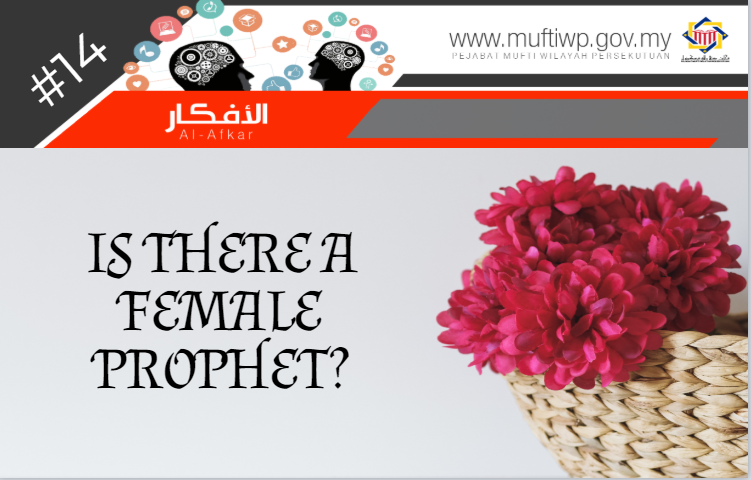 Is it true that there is a female prophet?

What has been stated clearly in the Quran, apostles are from among men and not women. This is the opinion of the majority of scholars as stated by Ibn Hajar al-‘Asqalani in Fath al-Bari, 6/447. This is also stated by Imam al-Nawawi where he states that the scholars have agreed according to Imam al-Haramain in al-Irsyad that Maryam (Mary) is not a prophet. (See al-Azkar, pg. 119)

The evidence is a statement of Allah SWT:

“And We sent not before you [as messengers] except men to whom We revealed from among the people of cities.”

The above verse affirms that Allah SWT do not sent prophets from among women and jinn. However, there are several scholars who hold the opinion that there are prophets from among women. Among them are Imam al-Qurtubi, Imam Abu al-Hasan al-Asy’ari and Ibn Hazm. (See Lawami’ al-Anwar al-Bahiyyah, 2/226). Among the women they considered as prophets are Maryam (Mary), Hawa (Eve), Asiah (Great Royal Wife of the Ancient Egypt's Pharaoh of the Exodus and the adoptive mother of the Prophet Moses AS), Sarah and Hajar (Prophet Abraham’s wives).

According to John DelHousaye, the Bible states several evidences regarding the existence of female prophets. In the Old Testament, it is stated, the name Mary (Exodus 15:20), Deborah (Judges 4:4), Huldah (2 Kings 22: 14; Chronicles 34: 22), Noadiah (Nehemiah 6: 14) and the term “several female prophets” (Isaiah: 8: 3). While, in New Testament, a woman mentioned as Anna is described as a female prophet by Lukas. (See https://www.cbeinternational.org/resources/article/mutuality/q-who-are-women-prophets-bible)

As for the Jews, they believe there are seven female prophets as stated by Rabbi Shlomo Yitzchaki and recorded in Talmud; they are, Sarah, Maryam (Mary), Devorah, Hannah (the mother of Prophet Samuel), Avigail (the wife of Prophet David), Huldah dan Esther. This is explained in detail in the book Kabbalistic Teachings of the Female Prophets: The Seven Holy Women of Ancient Israel by J. Zohara Meyerhoff Hieronimus.

According to Imam al-Qurtubi, when he was commenting on surah Yusuf verse 109:

“This is the critique of those who are of the opinion ‘And they said: Why are the angels not sent to them?’ (Surah al-An’am:8) which means the ones sent to us are from among the men, not from among the women, jinn or angels. This contradicts with a narration from the Prophet PBUH, where he said: “Indeed from among the women are four prophets which are Eve, Asiah the mother of Moses and Mary.” (See al-Jami’ li Ahkam al-Qur’an, 9/179)

Regarding the prophethood of Mary: ‘Humans are of differing opinions regarding the prophethood of Mary. It is said (i) Her prophethood is due to an angel being sent to her and she is able to communicate with an angel. It is said (ii) She is not a prophet for she communicates with the angel as a human, she is able to see the angel for Gabriel physical is such as the physical of Dihyah (al-Kalbi); when the Prophet PBUH was asked regarding faith and Islam. Opinion (i) is stronger.” (See al-Jami’ li Ahkam al-Qur’an, 11/62)

Regarding the hadith presented by Imam al-Qurtubi:

“Indeed, among women are four prophets which are Eve, Asiah, the mother of the Prophet Moses AS and Mary.”

We did not find the text for this hadith in any hadith books.

Ibn Hazm said that he is unaware of this issue except when he was Cordoba. He stated three opinions of scholars regarding this issue:

Ibn Hazm asserted that the story of Mary and the mother of Prophet Moses AS are clear evidences regarding female prophethood. (See al-Fasl fi al-Milal wa al-Ahwa al-Nihal, 5/12). In the story of Mary, there is an incident where Gabriel came to meet her. For him, among the characteristics of a prophet is meeting an angel. While in the story of the mother of Prophet Moses AS, she was given inspiration from Allah SWT to put Prophet Moses AS in the Nile river. Ibn Hazm’s opinion on the prophethood of Mary is cited by Imam al-‘Aini. However, for him, Imam Abu al-Hasan al-Asy’ari together with other scholars from Ahl al-Sunnah wa al-Jama’ah opinion in this issue states that prophets are only among men. (See ‘Umdat al-Qari, 4/194)

In truth, even if an angel came to meet someone, it does not mean that he is considered as a prophet, for when we review a hadith of the Prophet PBUH, angels also come to ordinary people:

“A person visited his brother in another town and Allah deputed an Angel to wait for him on his way and when he came to him, he said: Where do you intend to go? He said: I intend to go to my brother in this town. He said: Have you done any favour to him (the repayment of which you intend to get)? He said: No, except this that I love him for the sake of Allah, the Exalted and Glorious. Thereupon he said: I am a messenger to you from, Allah: (to inform you) that Allah loves you as you love him (for His sake).”

Furthermore, what happened to the mother of Prophet Moses AS is explained in the verse:

“And We inspired to the mother of Moses, "Suckle him;”

“And your Lord inspired to the bee, "Take for yourself among the mountains, houses, and among the trees and [in] that which they construct.”

Hence, it is inaccurate for us to say that the bees received revelations and is considered as prophets.

To conclude, the majority of scholars explained that prophets are only from among men. Allah SWT asserts:

“And We sent not before you except men to whom We revealed [Our message].”

Hopefully, this explanation will increase our understanding in religion and lead us to the road He blessed. Wallahua’lam.