AL-AFKAR #66: THE MEANING OF MAJOR SINS 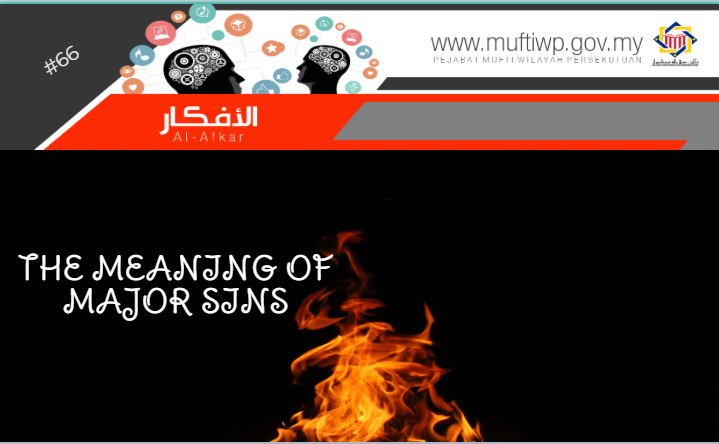 Assalamualaikum SS Dato’ Seri. Hope for an explanation regarding what is meant by great sins.

“And those who avoid the major sins and immoralities, and when they are angry, they forgive,”

“If you avoid the major sins which you are forbidden, We will remove from you your lesser sins and admit you to a noble entrance [into Paradise].”

“Major sins are those which Allah end the saying with the menace of Hellfire, a wrath, a curse or a great torment” (Refer: Jami’ al-Bayan ‘an Ta’wil Ay al-Quran, 5/59 and Tafsir al-Quran al-‘Azim, 2/282)

“Every sin which Allah relate it with the Hellfire is a major one.” (Refer: Tafsir al-Quran al-‘Azim, 2/285)

It is also stated in a hadith of the Prophet PBUH on the division of sins into major and minor where he says:

“The Messenger of Allah (ﷺ) said: Five prayers and from one Friday prayer to (the next) Friday prayer is an expiation (of the sins committed in between their intervals) if major sins are not committed.”

"Avoid the seven great destructive sins." They (the people!) asked, "O Allah's Apostle! What are they?" He said, "To join partners in worship with Allah; to practice sorcery; to kill the life which Allah has forbidden except for a just cause (according to Islamic law); to eat up usury (Riba), to eat up the property of an orphan; to give one's back to the enemy and fleeing from the battle-field at the time of fighting and to accuse chaste women who never even think of anything touching chastity and are good believers."

Al-Hafiz Ibn Hajar in Fath al-Bari cited some opinions regarding the meaning of major sins. Among them are:

He then stated that the definition by Imam al-Qurtubi in al-Mufhim is the best explanation of the meaning of major sins, which is:

“Each sin which made absolute by the Quranic texts, Sunnah or scholarly consensus (ijma’), promised with torments, the punishment of hudud or is detestable, then it is a major sin” (Refer: Fath al-Bari, 15/709)

This is the meaning of major sins as explained by the past scholars. We are advised to avoid these sins at all cost.

The scholars already made specific books on this. Some of them are Imam al-Zahabi through his book al-Kabair as well as Imam Ibn Hajar al-Haitami through his book al-Zawajir ‘an Iqtiraf al-Kaba’ir. They already explained in detail one by one the major sins that exist in the Quran and hadith while stating their torments and punishments.

Let’s make du’a to Allah SWT so that our sins will be forgiven as well as the sins of the people of the past.

"Our Lord, forgive us and our brothers who preceded us in faith and put not in our hearts [any] resentment toward those who have believed. Our Lord, indeed You are Kind and Merciful."”

May Allah SWT protect us from committing any major sins as well as shower us with guidance and strength in obeying His command. Ameen.