AL-AFKAR #85: DO GHOSTS PORTRAYED IN OUR SOCIETY REALLY EXIST? 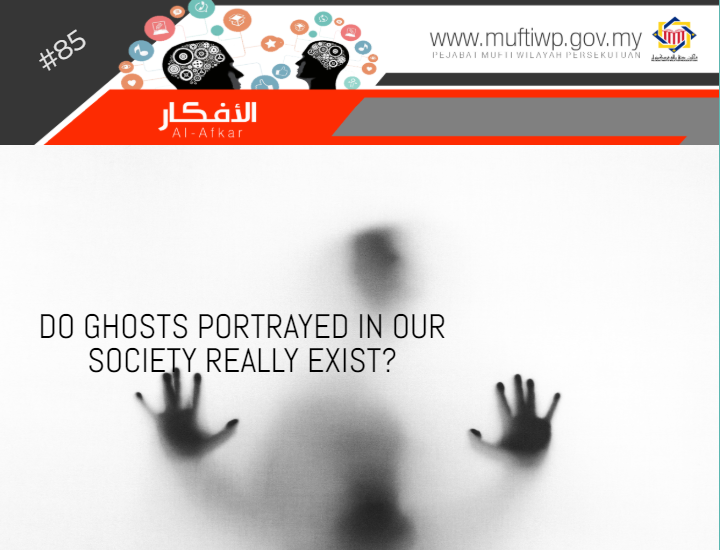 Salam Datuk. I am a horror stories’ lover. I will listen to any story or sharing of personal experience whether in radio or others. My question is, are ghosts like pontianak, pocong, langsuir and others really exist? Do these ghosts really exist or are they merely people’s imaginations? Or are they wandering souls of the dead? Hope for an explanation from Dato’. I am sorry if this question seems absurd.

Thank you for the one who asks. One of the things that is obligatory (wajib) for every Muslim to believe in is the unseen like Paradise, Hellfire, The Day of Judgement and etc. Among them is the existence of jinn and shaytan. It is stated by Allah in the Quran. Among them is the verse which states the story of the Prophet Sulayman AS. Allah SWT says in the Quran:

The same when Allah explains the existence of shaytan who will always be humans’ number one enemy. Allah SWT say:

“O children of Adam, let not Satan tempt you as he removed your parents from Paradise, stripping them of their clothing to show them their private parts,”

Even though we may not see them with our naked eyes, it does not necessarily mean they do not exist. Their existence may not be seen by us. This is stated by Allah SWT in the Quran through His saying:

“Indeed, he sees you, he and his tribe, from where you do not see them,”

Syeikh Tohir Ibn ‘Ashur states that some scholars decided that this verse is the dalil that shaytan is impossible to be seen. However, it is not the case. It means that they see us in a way we cannot see them. Even if we may not see them, it does not mean it is impossible for us to see them. Disability to see them does not completely deny their existence. (Refer Tahrir Ma’na Al-Sadid Wa Tanwir Al-‘Aql Al-Jadid Fi Tafsir Al-Quran Al-Majid, 3/26)

So, we can say that those who deny the existence of jinn and shaytan are in fact denying something which reaches the level of mutawatir, which when denied or rejected, it is feared that we may become kufur.

“Know that majority of the philosophers, Qadarites and all zindiq people deny the existence of jinn and shaytan. Their denial is not for any other reason other than because they did not contemplate (tadabbur) and learn in-depth regarding the shariah. While there are mutawatir nas and athar which are masyhur on this.” (Refer Aakam Al-Marjan Fi Gharaib Al-Akhbar wa Ahkam Al-Jann, pg 6)

Abu al-Qasim al-Ansari, a student of Imam al-Haramain stated that affirming the existence of jinn and shaytan is not something logically impossible. The excerpts of al-Quran and hadith already affirm their existence. Therefore, the believers should know that it is something acceptable by the intellect (aql) and already proven by the nas. (Refer Aakam Al-Marjan Fi Gharaib Al-Akhbar wa Ahkam Al-Jann, pg 6-7)

Coming back to the question asked, the portrayal of ghosts by our society through film or drama like pontianak, pocong and etc is something that does not exist. It is none other than something related to the illusion of jinn and shaytan. They are given some specialities by Allah to shapeshift and appear into any form to scare people.

Syeikh Muhammad al-Shibli said that it is undeniable that jinn and shaytan are able to shapeshift either in the form of humans or animals. Just like when shaytan appears as Suraqah bin Malik bin Ja’syam and came to the Quraish people when they were on their way to the battle of Badr. (Refer Aakam Al-Marjan Fi Gharaib Al-Akhbar wa Ahkam Al-Jann, pg 21)

Syeikh Sulayman al-Ashqar stated that sometimes, shaytan came to humans by whispering some doubt, while at times they came in the form of humans. We may hear their voice but are unable to see their physical body. They may also appear through peculiar forms. (Refer Silsilah Al-‘Akidah : Alam Al-Shayatin Wa Al-Jinn, pg 91).

Al-Qadhi Abu Ya’la stated that shaytan has no capability to shapeshift. However, there is a possibility that Allah taught them some words or actions which when done or recited, they may shapeshift to other forms or appear as something different. (Refer Aakam Al-Marjan Fi Gharaib Al-Akhbar Wa Ahkam Al-Jann, pg 21-22).

Even if shaytan and jinn may shapeshift or appear as something peculiar, but one should remember that their ability to shapeshift can never harm us. Harm or benefit all comes from Allah SWT. Jinn or shaytan who becomes ‘ghosts’ can neither benefit nor harm us like wounding or killing humans.

This is strengthened by the saying of the Prophet PBUH in which he said:

“There is no ghoul,”

Al-Khattabi when commenting on this hadith stated that this hadith does not deny their existence and their ability to shapeshift, but rather deny their ability to deviate and harm humans. Don’t be scared of them as they are unable to do anything without the will of Allah SWT. He also stated that Ghilan is a shaman among the jinn. (Refer Ma’alim Al-Sunan Fi Syarh Al-Sunan, 4/234).

In conclusion, ghosts portrayed by our society like Pontianak, langsuir, pocong and etc are in fact the result of the jinn and shaytan who shapeshift to scare humans. They are not originated from the souls of the dead as believed by some people in our society. Besides, we are not permitted to add or exaggerate on the matters of the unseen. Stop believing in the superstition (khurafat or tahyul) in our society. May Allah protect our faith and us from falling into shirk and khurafat. Wallahua’lam.