AL-AFKAR #109: DAJJAL IS AN INDIVIDUAL OR A GROUP? 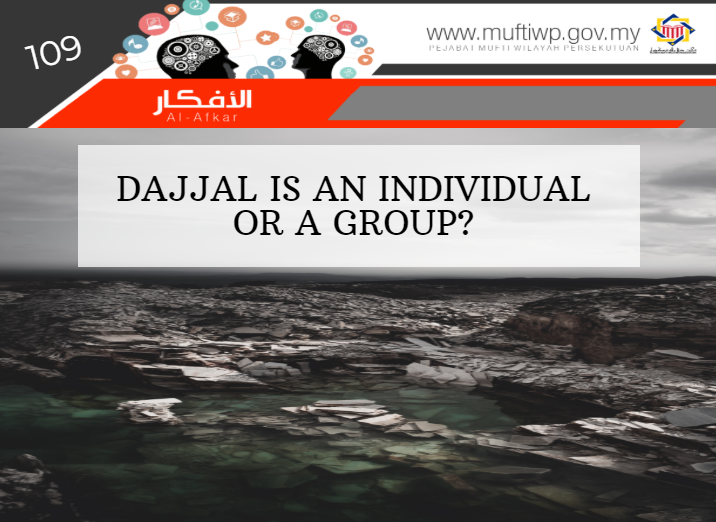 Assalamualaikum ustaz. Hopefully, you are in the best of health. I have a question. I once heard a hadith which states that at the end of time, Dajjal will rise to spread falsehood and lies. My question is, is dajjal just an individual or a group? What is the meaning of dajjal in the hadith? Hope for an explanation.

Among the greatest trials that will be faced in the end of time is the rise of dajjal. Therefore, the Prophet PBUH taught a du’a as a way to avoid this fitnah. The du’a is as what is narrated by Sayyidatina ‘Aisha where the Prophet PBUH said:

Even in another narration of the hadith portrays that the rise of dajjal will test and shake one’s faith. This can be seen through the hadith narrated by Abu Hurairah where the Prophet PBUH said:

When three things appear faith will not benefit one who has not previously believed or has derived no good from his faith: the rising of the sun in its place of setting, the Dajjal, and the beast of the earth

Coming back to the question presented, indeed, there is a hadith which tells that a liar will rise at the end of time called dajjal. This is in accordance with a hadith narrated by Abu Hurairah where the Prophet PBUH said:

“There will be in the end of time charlatan liars coming to you with narrations that you nor your father heard, so beware of them lest they misguide you and cause you tribulations”

In another narration states:

And the Hour will not be established till there appear about thirty liars, all of whom will be claiming to be the messengers of Allah

If we take a closer look at these narrations, dajjal is mentioned in the plural form which is dajjalun that means dajjals. However, does it mean that dajjal is plural?

“(The meaning of dajjal) is a grip and confusion. In which there are several bad planning and confusion.” (Refer Aun Al-Ma’bud Syarh Sunan Abi Daud, 9/1446)

“It originates from the phrase al-Dajl which means hiding the truth and presenting something invaluable. They exist in every period of time.” (Refer Al-Minhaj Syarh Sahih Muslim, 18/45).

In fact, if we consider during the time of the Prophet PBUH, there are several people who are called as dajjal. Among them is Ibn Sayyad, Musilamah and many more. Mawlana Anwar Shah al-Kashmiri said that Ibn Sayyad is not the real dajjal. This is in accordance with a statement mentioned in Musannad Abdurrazaq:

“O people, verily, Ibn Sayyad is not the real dajjal”

So, he is named dajjal due to his lying habit and he is full of falsehood. (Refer Faidh Al-Bari Syarh Sahih Al-Bukhari, 3/120).

In conclusion, based on what is stated, the hadith does not imply that dajjal is plural. Dajjal mentioned as al-Masih is just the one creation who will rise at the end of time as a sign that Doomsday is near. Dajjal meant in the hadith is general in the meaning of a liar, fabricator and deceiver who loves to spread falsehood that is believed by the people.

May Allah gives us understanding and protects us from becoming minor dajjals. Wallahua’lam.