AL-KAFI #499: DREAM BEING CHASED BY SNAKES, EATEN BY CROCODILE AND TIGER 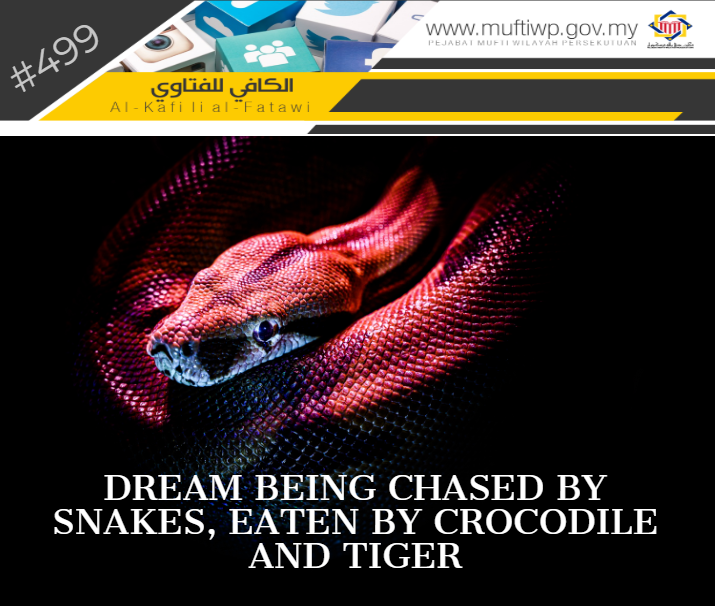 I had a dream where I was chased by snakes and eaten by a crocodile and tiger. Is my dream just a dream or disturbance from the shaytan?

Sorry, but we don’t know the meaning of dreams where one is chased by snakes or being eaten by crocodile and tiger.

As for the dream of seeing a tiger, we include the opinion of al-Imam ‘Abd al-Ghani al-Nabulsi:

“Whoever sees a tiger in his dream, he should recite istighfar and repent to Allah SWT for all his sins. The evidence is that it symbolizes the pious kings of Persia. Tiger is also a symbol of strength and humans are scared of it. It may also mean a multifaceted person.” [1] In our opinion, it refers to the greatness of a person. Thus, istighfar is an encouragement in order to reflect on a person’s weakness and removing arrogance.

While, if one dreams of meeting a crocodile, Imam ‘Abd al-Ghani al-Nabulsi said:

“Seeing a crocodile is symbolic to police. Crocodile in water refers to an untrustworthy person, whether he is a friend or foe. The crocodile could also refer to a cruel and dishonest businessman. Whoever sees a crocodile, then the crocodile catches him, hauling him in water and kill him. Then surely, he will be captured by the police who will seize his property and kill him. If he is safe from it, then he will be saved.

Among some guides for anyone who had a nightmare are:

“So, if someone has a dream which he dislikes, he should not tell it to others, but get up and offer a prayer."

“Verily the vision of a believer is one of the forty-sixth part of Prophecy.”

Indeed, the dream of a believer at the end of times will give a positive effect in his life and society. Hopefully, this explanation will give us understanding in this issue.