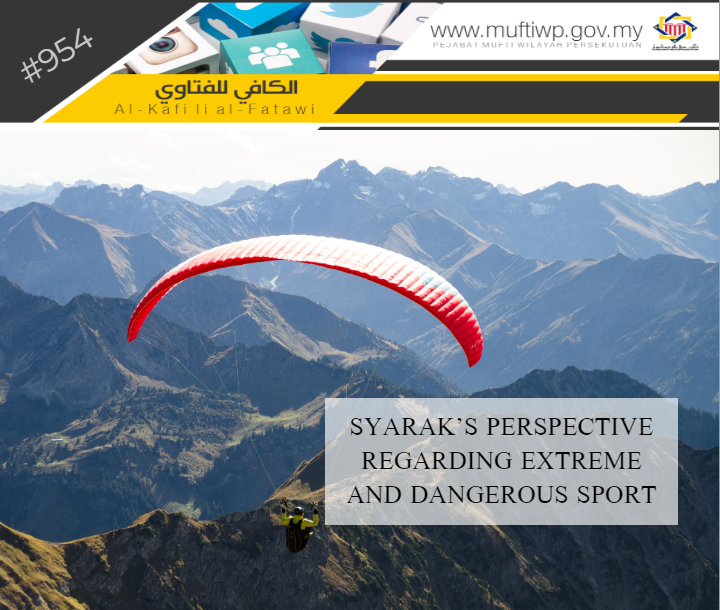 What is the ruling of playing dangerous games in amusement parks such as roller-coasters? Or participating in extreme sports such as bungee jumping and paragliding?

Islam is a religion that emphasizes the protection of life and safety. Allah SWT state:

The definition of extreme sports by Cambridge Dictionary state, a dangerous and fun sport.

Scholars discussed the issue of involvement with dangerous sports and games. According to Ibn ‘Abidin, a renowned scholar of madhhab Hanafi said:

“…and it is permissible for every dangerous game for skilled or trained athletes whose safety is assured such as an archer/shooter or snake hunter and it is also permissible to watch them at the time.” (Refer Al-Dur al-Mukhtar 6/404)

However, scholars set several conditions that should be obeyed for those who are involved in dangerous sports. Some of them are:

Imam Ibn Bhattal commented on the above hadith said it meant that the person is no longer under the protection of syarak for he himself is the reason of the harm that falls on him. Since he did not protect himself, then syarak will not protect him. (Refer Sharh al-Bukhari, 5/89)

Imam al-Hafiz Ibn Hajar said as for travelling into the sea, if the situation is safe, then its ruling is the same as travelling on land. (Refer Fath al-Baari Syarh Sahih al-Bukhari 6/88)

According to Dr Muhammad H. Siddiqi, President of Fiqh Council of North America, any type of sport that is considered as dangerous and could lead to death should be avoided. But if it is an extreme sport and there are precaution steps taken in order to protect the life of the players, then it is permissible. (Refer https://archive.islamonline.net/?p=1242)

However, there are scholars who ruled it prohibited, such as Syeikh Ibn ‘Uthaimin, according to several evidences, among them is a statement of Allah SWT:

“And do not kill yourselves [or one another].”

Thus, anything that could lead to harm or death is prohibited. The same as when we are prohibited to harm others, we are also prohibited from harming ourselves. (Refer Fataawa Nur ‘ala al-Darb, 13/252)

To conclude, there are two different opinions in this issue; one permits it while the other prohibits it. The opinion that prohibits it is a careful opinion and emphasizes on the basis of sadd al-ara’ie, which means closing the doors of harm, while the opinion that permits it, look at the original ruling of entertainment, sports and games, as long as the aspects of safety is emphasized.

We are inclined towards the first opinion, which states the ruling of getting involve in dangerous games and sports is permissible if safety steps are taken and considered and those who are involved are sufficiently trained and are competent and through ghalib al-zhan that the participants are safe.