AL-KAFI #1005: MAKMUM DISTRACTING OTHERS DUE TO HIS LOUD RECITATION IN PRAYER 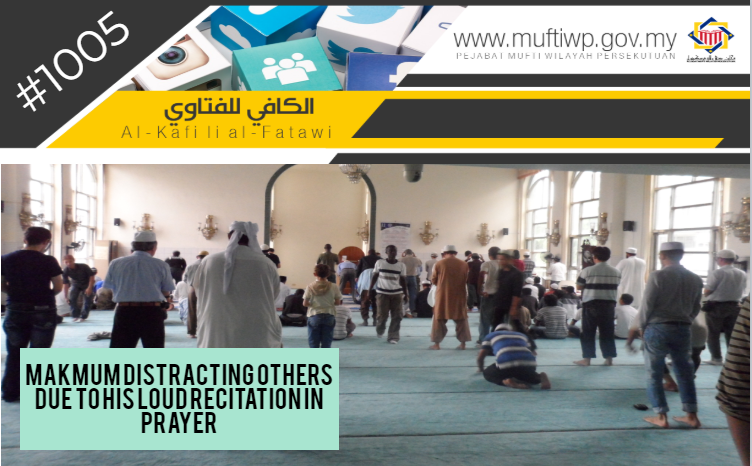 What is the ruling for a makmum to recite his recitation in congregational prayer in a loud voice?

Generally, a makmum is restricted from reciting in a loud voice following the imam, where he is supposed to actually just recite in a low voice that only he could hear it. Imam al-Nawawi stated this fact in al-Majmu` Syarh al-Muhadzdzab (3/364): “When we state that it is obligatory for a makmum to recite the Fatihah during Jahar prayers (prayers where the recitation is read out loud by the imam, such as Subuh and Friday prayer), (but) it is makruh for a makmum to recite his recitation loudly that it would distract others (praying near him), where he should lower his voice, so that only himself can hear it, if he is not deaf and there’s nothing hindering his recitations such as other loud noise and others, for it is the minimum requirement for recitation.”

Although the above statement mentioned that it is makruh, there are some Syafieyyah scholars that ruled it prohibited when it distracts others for it is a form of harm. Imam Ba Fadl state in al-Muqaddimah al-Hadhramiah: “And it is prohibited to raise one’s voice if it will result in tasywisy (disrupting the recitation) of others.”

The difference of both opinions is harmonized by Imam Ibn Hajar al-Haitami in al-Minhaj al-Qawim (pg. 125-126): “[And it is prohibited] for every individual to raise his voice in or outside of prayer [if it disturbs others] such as other people who are praying, or reciting the Quran, sleeping or harming others and referring to the disrupting speech; the claim made even by a fasiq that someone is disturbing him with loud recitation is accepted. What is stated from the prohibition (from the evidence al-Muqaddmah al-Hadhramiah), but the prohibition is denied through the words (Imam al-Nawawi) in al-Majmu’ and others, then it is clear that it is not prohibited, unless if it is compiled (both opinions) with the possibility of it being makruh if tasywisy (disruption) is minor.”

The prohibition is relevant following the syariat that is based on preventing harm. This Islamic legal maxim is based on a hadith of the Prophet PBUH:

The same is stated in Busyra al-Karim (pg.286), al-Allamah al-Habib Ba ‘Isyn agreed with the above harmonization and includes situations where there is no necessity: “[And it is prohibited] for someone who is praying, without any valid reasons, to raise his voice in or outside of prayer [if it disturbs others] such as other people who are praying, reciting the Quran and others which may cause harm. And referring to the disrupting speech; the claim made even by a fasiq that someone is disturbing him with loud recitation is accepted. (This prohibition happens) if it is a great disruption to others. If not, then it is makruh. Thus, the difference of opinions is harmonized (as stated above). However, if there is a necessity, such as a noisy place that call for someone to raise his voice, then it is neither makruh nor prohibited.”

We would also like to include the following exceptions where it is permissible for a makmum to raise his voice. Among them are:

Hence, according to the above discussion, we could conclude the following points:

Hopefully, this explanation would benefit us all. Wallhua’lam