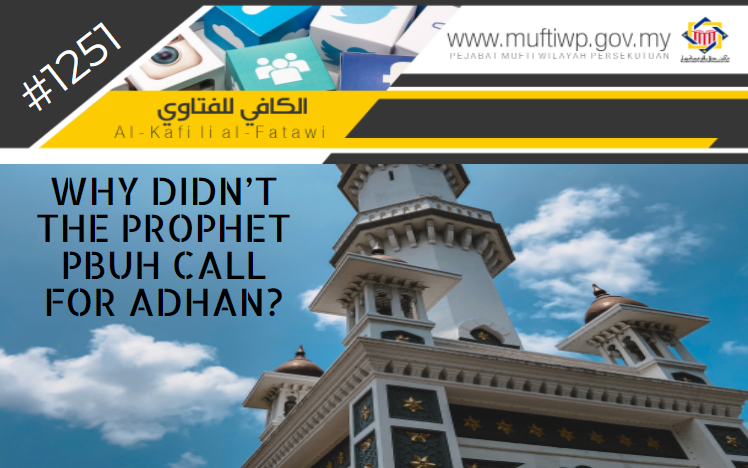 I would like to ask; why didn’t the Prophet PBUH himself call for adhan?

“Indeed, the Prophet PUH as well as khulafa’ al-rasyidin lead the prayer, but never called for adhan, the same goes for prominent scholars after them” (See: al-Majmu’, 3/86).

In answering the question on why the Prophet PBUH and the khulafa’ al-rasyidin did not call for adhan, it is because the Prophet PBUH and khulafa’ after him held a massive role on handling the problems of the Muslims which is more important, and these tasks are impossible to be done by other people. So, their time is so precious in fulfilling the needs of the people, unlike being an imam because prayer is wajib, and surely they will attend it. Imam al-Nawawi relate this hujjah with the words of Saidina Umar RA:

“If I am able (to fulfill the duty) to call for adhan while at the same time (fulfilling the tasks) for khilafah, I will call for adhan”

The other jurists also did not miss out to discuss on the wisdom behind this question, which is why didn’t the Prophet PBUH call for adhan.

Secondly, al-Hattab states the wisdom behind this is, if the Prophet PBUH called for adhan, in which there is an imperative clause to perform the prayer on the saying:

“Hasten to the prayer”

While in fact prayer has its extensive time, in which it can be performed during its whole time, like Zuhr which may be performed as long as it is not Asr yet. However, when the one who call for adhan is the Prophet PBUH himself, it becomes a wrongdoing to refuse the call or command of the Prophet PBUH as mentioned by Allah SWT in the Quran:

Do not make [your] calling of the Messenger among yourselves as the call of one of you to another. Already Allah knows those of you who slip away, concealed by others. So let those beware who dissent from the Prophet's order, lest fitnah strike them or a painful punishment.

So, it is clear from the above statement of Allah SWT, that it is sinful to hear the call of the Prophet PBUH, but does not oblige. (See Mawahib al-Jalil, 1/422).

Thirdly, Imam al-Naisaburi also stated the wisdom behind this question that testifying to the Prophet PBUH is also part of the adhan itself. So, it is not right for him to testify upon himself. (See Nur al-Absor, 49).

However, even though the Prophet PBUH did not call for adhan to call for prayer, there are evidences stating on the position of a muezzin or a person calling for adhan. Among them,

The Prophet PBUH’s saying through hadith narrated by Malik bin Huwairith RA that the Prophet said:

and one of you should pronounce the Adhan for the prayer when its time is due and the oldest one amongst you should lead the prayer.

O Allah! Guide the Imams and pardon the Mu'adh-dhins

Besides, there is a hadith which states on specific reward for the muezzin as narrated by Ibn ‘Umar R.Anhuma where the Prophet PBUH said:

May Allah SWT give us understanding in His Shari’a. Ameen.