AL-KAFI #1473: THE RULING OF PERFORMING ISTIKHARAH PRAYER IN CONGREGATION 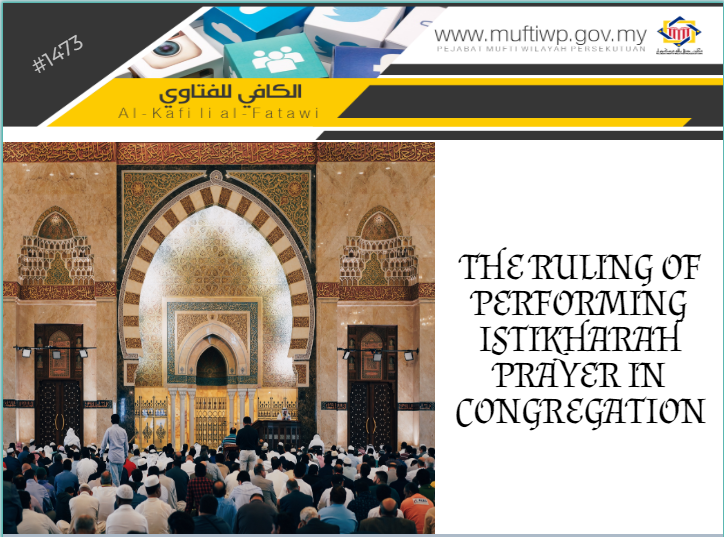 Assalamualaikum SS Mufti. Can istikharah prayer be performed in congregation?

Istikharah means asking for help in making choices. In Fiqh perspective, one asks to be given a determination upon something chosen by Allah SWT. Mainly, it is done through prayer or reciting du’a which are warid on istikharah.

The Prophet (p.b.u.h) used to teach us the way of doing Istikhara (Istikhara means to ask Allah to guide one to the right sort of action concerning any job or a deed), in all matters as he taught us the Suras of the Qur'an. He said, "If anyone of you thinks of doing any job he should offer a two rak`at prayer other than the compulsory ones and say (after the prayer): -- 'Allahumma inni astakhiruka bi'ilmika, Wa astaqdiruka bi-qudratika, Wa as'alaka min fadlika Al-`azlm Fa-innaka taqdiru Wala aqdiru, Wa ta'lamu Wala a'lamu, Wa anta 'allamu l-ghuyub. Allahumma, in kunta ta'lam anna hadha-lamra Khairun li fi dini wa ma'ashi wa'aqibati `Amri (or 'ajili `Amri wa'ajilihi) Faqdirhu wa yas-sirhu li thumma barik li Fihi, Wa in kunta ta'lamu anna hadha-lamra shar-run li fi dini wa ma'ashi wa'aqibati `Amri (or fi'ajili `Amri wa ajilihi) Fasrifhu anni was-rifni anhu. Waqdir li al-khaira haithu kana Thumma ardini bihi.' (O Allah! I ask guidance from Your knowledge, And Power from Your Might and I ask for Your great blessings. You are capable and I am not. You know and I do not and You know the unseen. O Allah! If You know that this job is good for my religion and my subsistence and in my Hereafter--(or said: If it is better for my present and later needs)--Then You ordain it for me and make it easy for me to get, And then bless me in it, and if You know that this job is harmful to me In my religion and subsistence and in the Hereafter--(or said: If it is worse for my present and later needs)--Then keep it away from me and let me be away from it. And ordain for me whatever is good for me, And make me satisfied with it). The Prophet (ﷺ) added that then the person should name (mention) his need

This is also the opinion of madhhab Imam Ahmad bin Hanbal. This is as stated by Imam Ibn Qudamah: It is permissible to (perform) sunnah prayer congregationally as it is individually. This is because the Prophet PBUH did both ways (sometimes in congregation, sometimes by himself). And most sunnah prayers of the Prophet PBUH are done individually. Refer Al-Mughni, Ibn Qudamah (1/442).

In conclusion, we state that basically, istikharah sunnah prayer is among sunnah prayers to be performed individually and this is prioritized. However, we state that if it is done congregationally at times, it is permissible. To add, especially when it is pertaining to matters that are related to the welfare of majority or the congregation as a whole, for example, the decision of mosque authority whether their actions are reasonable or not, benefits the congregation as a whole or not, then it is permissible to perform istikharah prayer congregationally in this situation.

Pertaining to the signs after istikharah is done, this issue has already been discussed in-depth in Irsyad al-Fatwa Series 342: Is Dream a Condition for the Answer of Istikharah? Which could be read through the following link: https://bit.ly/2P7KhzM

Lastly, we pray to Allah SWT to bless us with the correct understanding for us in religion. Ameen.