AL-KAFI #1579: WILL PHYSICAL CONTACT WITH A NON-MUSLIM INVALIDATE ABLUTION? 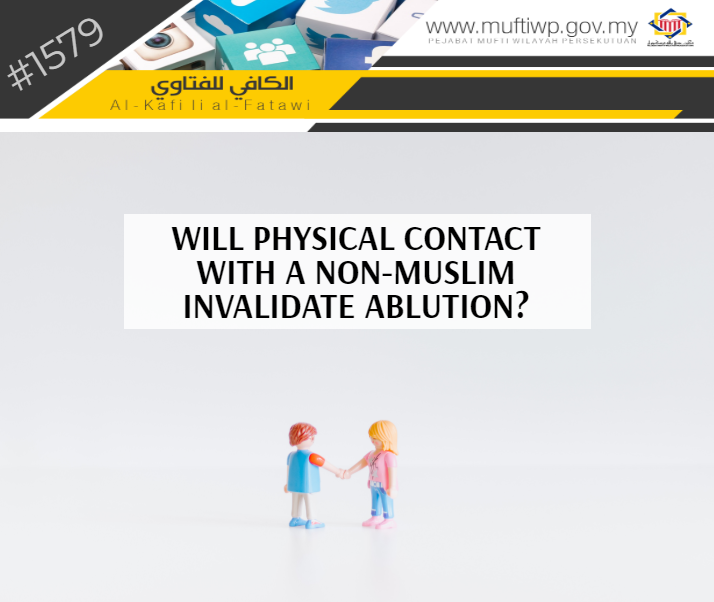 I want to ask whether an ablution of a Muslim woman would be invalid if she has physical contact with a non-Muslim woman? The reason is I have a lot of non-Muslim friends in my office. I feel bad if I refuse to shake hands with them, for I want to maintain my ablution. Hope to get an explanation from you. Thank you.

Syeikh al-Sa’di said that there are numerous rulings (that could be extracted) from the above verse. Among them is the commandment of prayer, setting one’s intention to pray and the valid condition of purifying oneself for prayer, as well as it is not wajib to purify oneself when the time of prayer begins but it is wajib when a person wants to perform prayer and others. (See Tafsir al-Sa’di, pg. 222)

In concluding this issue, Habib Hasan bin Ahmad al-Kaff said in his book that there are four matters that invalidate ablution:

First of all, we should know that the final opinion of madhhab Syafie states, direct skin contact between non-mahram of opposite genders (such as a woman and an ajnabi man) invalidates ablution. Allah SWT states:

“And if you are in a state of janabah, then purify yourselves. But if you are ill or on a journey or one of you comes from the place of relieving himself or you have contacted women and do not find water, then seek clean earth and wipe over your faces and hands with it.”

Imam al-Nawawi states in his book:

“Indeed, physical contact between ajnabi man and woman invalidates ablution regardless of whether it is with desire or otherwise. However, the contact does not invalidate ablution if it is not a direct contact if there is barrier between them even if it is a thin cloth.” (See al-Majmu’ Syarh al-Muhazzab, 2/30)

For more information on the discussion of this issue, refer to our previous articles as the following:

Syeikh al-Islam Zakaria al-Ansari said that humans are honoured. The implication from their honour is that they are not considered as najis even after their death, regardless of whether they are Muslims or otherwise. As for Allah SWT’s statement in surah al-Taubah verse 28: “O you who have believed, indeed the polytheists are unclean,” Unclean (najis) in this verse refers to their belief as well as the commandment to avoid their belief and not that their physical body is considered as najis. (See Asna al-Matalib, 1/10)

According to the above discussion, we conclude that physical contact through handshakes or others among people of the same gender even of different religions does not invalidate ablution.

Islam never prohibits us from being polite and doing good towards the non-Muslims. In fact, we are commanded to be fair and show our good character and conduct towards everyone. Hopefully, it will be the reason for them to approach and get closer to Islam. Allah SWT states:

Lastly, we pray that Allah SWT gives us all a good understanding in practising His religion. Amin.