AL-KAFI #1592: THE RULING OF PROSTRATING ON A SHARP OBJECT 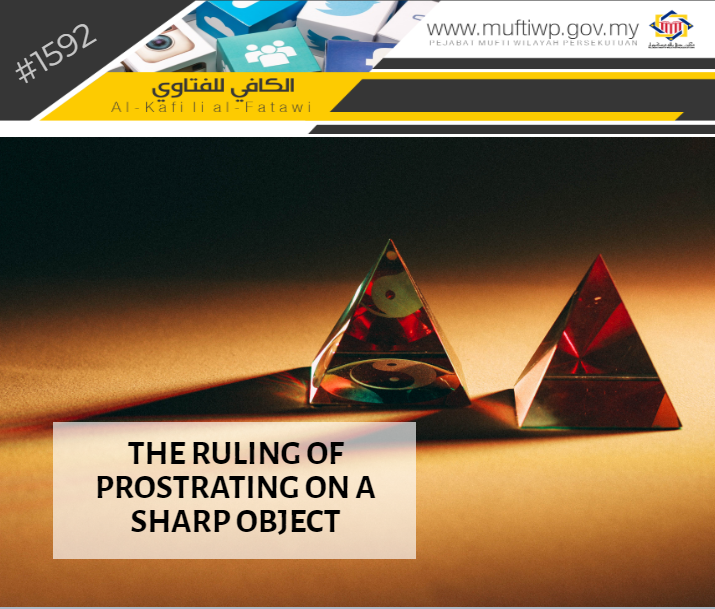 Assalamualaikum wbt, I want to ask what is the ruling of prostrating on a sharp object such as rock and others? Usually, our reflex reaction would be to immediately lift our head and move our head and prostrate again. Isn’t lifting your head when prostrating invalidates prayer?

Prostration is a specific act of worship only towards Allah SWT. Thus, in the Quran the word prostrate is often meant as prayer. Allah SWT states:

The Definition of Prostration

Prostration literally means inclination or humbleness. While the term means placing a part of one’s forehead on the place of prostration. (Refer Nihayah al-Muhtaj, 1/509)

Prostration is one of the fi’li (action) requisite in prayer. For every requisite, it has its own valid conditions. Regarding prostration, we present several hadiths of the Prophet PBUH that is used as the istidlal in madhhab Syafi’e. Among them are:

“When you prostrate, keep your head on the ground and do not move too quickly,”

According to the above question, it is related to the seventh valid condition which is thama’ninah. Thama’ninah in prostration means placing the forehead on the place of prostration for a duration a person recites “subhanallah”. This is in accordance with a hadith narrated by Ibn Hibban stated above. It is also stated in another hadith of the Prophet PBUH:

Prostration must be performed by placing all seven parts of prostration in thama’ninah, however, the important part for prostration is the forehead. The reason is if the forehead is covered or obstructed then the prostration is invalid. The same is applicable if he lifts his forehead without any reason. (Refer: Hasyiyah al-Baijuri; 1/350)

The ruling of lifting one’s head during prostration is divided into two situations:

Reasons permitted by syarak includes when a person prostrates on a sharp surface or object, or any surface that can cut or injure his head, then it is permissible for him to lift his head on the condition that his prostration has not reached the thama’ninah.

Syeikh Ibrahim al-Baijuri said: “If a person prostrated on a rough surface that it hurts his forehead as an example, then if he moves his forehead without lifting it off the ground then it does not affect his prayer. If he lifts his head and prostrates again before it reached thama’ninah, then it does not affect his prayer. Consequently (the prostration has reached thama’ninah), then it has harmed his prayer for he has added another prostration in his prayer. And if he lifts his head without any reasons permitted by syarak and places it back then his prayer is invalid.” (Refer Hasyiyah al-Baijuri; 1/350)

Syeikh Daud al-Fatoni stated in Bughyah al-Tullab: “(And if) a person prostrates on a sharp object and he lifts his forehead then prostrate again on a different place, then his prayer is invalid, if the prostration has fulfilled the first condition (thama’ninah). And if not, then it is considered as a minor movement, thus, he should try not to lift his head and move his head a little away from the sharp object as to not invalidate his prayer.” (Refer: Idhoh al-Misbah, 1/439)

To conclude, after analysing the above discussion, we conclude that the ruling of prostrating on a sharp object or anything on the surface of the place of prostration that could harm a person’s forehead is as the following:

May Allah SWT give us the right understanding in religion. Amin.