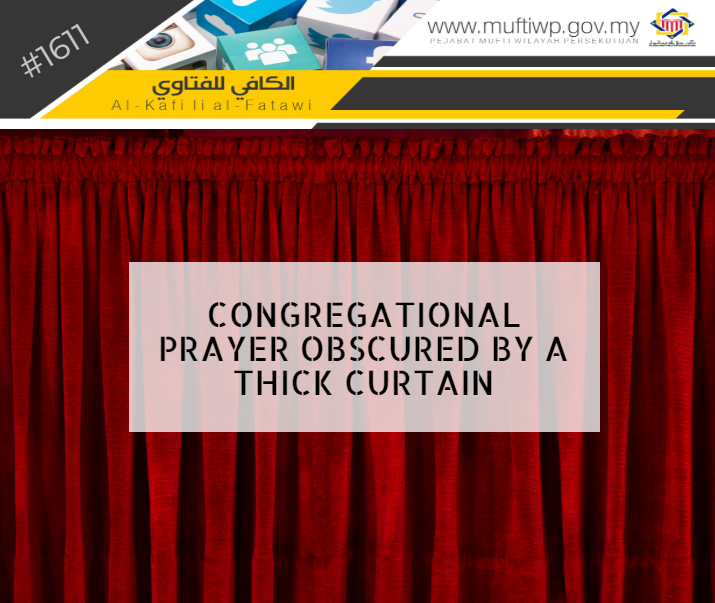 Assalamualaikum. I want to ask regarding the status of congregational prayer of women who follow a male imam in an office surau (gazette as surau by
Federal Territory Islamic Religious Department), where the male and female congregation is separated with an opaque curtain of which the movements of the imam cannot be seen but is known by the clear voice of the imam. Is the prayer valid and if so, will they receive the rewards of praying in a congregation?

Among the valid conditions of congregational prayer is that the imam and makmum must be in the same place or ijtima’. If there is an obstruction between the imam and makmum that separates them, then the prayer of the makmum who follows the imam is invalid. The condition of ijtima’ is different when prayer is performed inside or outside a mosque. If it is inside a mosque, then the conditions are as follows:

The reason is the mosque is built for the purpose of congregational prayer, thus every ruling of worship performed in it is considered as when it is performed in congregation. Refer al-Majmu` Syarh al-Muhadzzab (4/307) by al-Nawawi; al-Bayan (4/139) by al-Imrani; al-Mughni (2/152) by Ibn Qudamah.

While for the qudwah of outside the mosque or either one of them, whether the imam or the makmum, outside of a mosque, the conditions are as the following:

According to madhhab al-Syafie, a cloth which acts as a separation such as a thick curtain used to separate one place into two, for the context of praying place other than in a mosque such as in a house and office. Syeikh Zainuddin al-Malibari said:

“If something is obstructing a road, such as a window or view such as a closed-door, even if it is not locked, surely it would prevent musyahadah (vision/sight), even if it does not obstruct a road, for example, an opaque and lengthy cloth.” Refer Fath al-Mu`in (pg.75); Tuhfah al-Muhtaj (8/203)

Thus, when a female makmum is separated by a cloth, but she can reach the imam for it does not obstruct her and she can pass through it and it does not prevent rukyah (sight/vision) for it is closed with a thin or thick cloth but it is slightly opened that she can see the imam, then her congregational prayer is valid.

“Then if a person leave the qudwah intention or doubt in the intention (which includes the condition of unfulfilled qudwah) then he follows the action such as bowing for rukuk following (the ‘imam’) or give salam with the intention of following the imam and if he waited for a long time, then the prayer is invalid.”

In I`anah al-Tolibin (2/25) the reason the prayer is invalid is because:

“It is due to the fact that a person is negligent with his situation of praying, suspending his prayer with the prayer of another person without a valid connection between them.”

This is the asah (sahih) opinion. As for muqabil asah (the opposite opinion from the sahih opinion) scholars state that it does not invalidate prayer but it is considered as a prayer performed alone. This fact is stated in al-Majmu` Syarh al-Muhadzzab (4/201):

According to the above facts and discussion, we are inclined to state that it is best to not place a curtain that would obstruct the view of a female makmum towards the imam. This is to avoid the khilaf regarding the validity of congregational prayer and it is considered as a prayer performed alone. Imam al-Baihaqi stated a narration from Imam al-Syafie which states:

“Several women were together with Aisyah, the wife of the Prophet PBUH in her room, then Aisyah said: Don’t you pray together with the imam (for his room is beside the Nabawi mosque at the time). For indeed, you cannot follow him for there is a separation.” Al-Syafie said – May Allah SWT bless him - : Just as Aisyah has stated (regarding the congregational prayer) in his room, if she said as such, then we are of the same opinion.” Refer Sunan al-Kubra (5246) by al-Baihaqi.

Furthermore, congregational prayer behind an imam of which one cannot see the imam is difficult for the person following the imam to correctly discern the imam’s actions. This situation will expose the makmum with confusion if the imam makes a mistake in the requisites, tilawah prostration, sahwi prostration and others.

However, if the fact which state an office surau has been gazette as a mosque by a religious department, such as if it is prepared for the five obligatory prayers, and its surau name is retained for administration purposes, then the presence of the curtain does not affect the congregational prayer. We have discussed this issue in al-Kafi #833: I’tikaf in Federal Territories Surau Diri Jumaat (where Friday prayer is Performed); Irsyad al-Fatwa Series 103: The Ruling of Tahiyyatul Masjid in Surau Diri Jumaat.

If a makmum is praying in a place where its status is not a mosque, behind a completely closed opaque curtain of which the movements of the imam cannot be seen, then the prayer is invalid according to the asah opinion. The second opinion states that the prayer is valid but she would lose the rewards of congregational prayer. Whereas the opinion in madhhab Maliki said that the prayer is valid but it is makruh (undesirable) if the makmum is near the imam and she is able to hear the voice of the imam and the actions of the imam is known even without seeing the actions of the imam. Refer Hasyiah al-Dusuqi (1/338); al-Majmu’ (4/309)