AL-KAFI #1648: IS IT PERMISSIBLE FOR A MUFTI TO TAWAQQUF IN ANSWERING A RULING ISSUE? 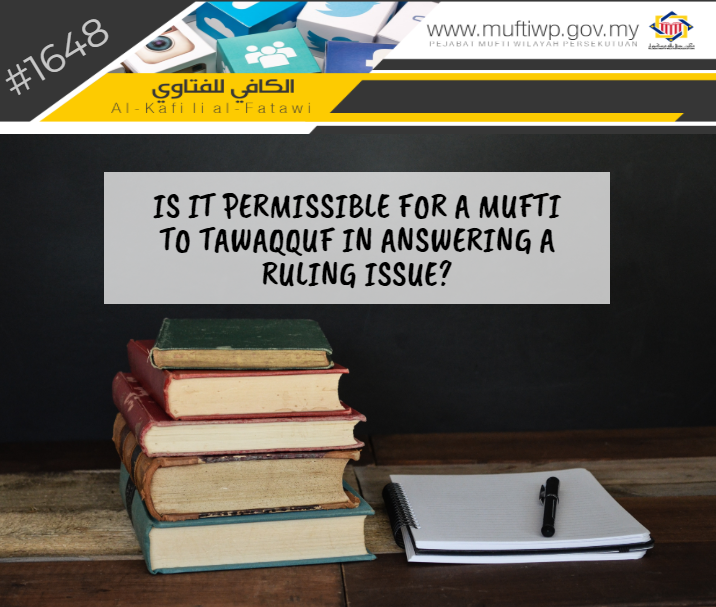 Assalamualaikum wbt. Is it permissible for a mufti to refuse to answer an issue regarding a ruling of certain matters asked to him?

Fatwa is a heavy matter according to syarak. Due to this, we can see how the salafussoleh are very careful in answering every matter asked to them. Among the evidences that are used in this issue is a hadith narrated by ‘Ubaidullah Ibn Abi Ja’far RA, he said, the Prophet PBUH said:

Coming back to the question presented, generally, we would like to state that answering a question for those who have the knowledge to do so is a fardhu for them. While keeping quiet or staying silent for those who do not have knowledge is also a commandment in Islam. This is according to two of the statements of Allah SWT:

He said, "O Adam, inform them of their names."

They said, "Exalted are You; we have no knowledge except what You have taught us. Indeed, it is You who is the Knowing, the Wise."

In the issue of tawaqquf which is stopping oneself from answering a question asked, then it is an example of previous scholars. Among the reasons they chose to tawaqquf are:

To conclude, we would like to state that basically, it is an obligation for a mufti to answer all and any question that is within his knowledge and capacity to answer. The reason is, neglecting to answer an issue of which he knows the answer to is included as hiding knowledge which is prohibited by the Prophet PBUH. This is according to a hadith narrated by Abu Hurairah RA, where he said the Prophet PBUH said:

“He who is asked something he knows and conceals it will have a bridle of fire put on him on the Day of Resurrection.”

The same is stated in an Islamic legal maxim:

“Delaying in giving explanation in the time of which it is needed is impermissible.”

However, if the mufti does not know the accurate answer for a certain issue, whether because it is a fairly new matter that calls for more analysis and research or the matter is unclear to the mufti because there are different evidences on the matter, then it is permissible for a mufti to tawaqquf in giving an answer on the issue.

Other reasons for this have been discussed in our previous article Al-Kafi #155 which can be accessed through the link https://bit.ly/2IkObB9

Lastly, we pray to Allah SWT to give us the right understanding in religion. Amin.