AL-KAFI #1649: THE RULING OF A PERSON PASSING AWAY WITHOUT PAYING THE ZAKAT 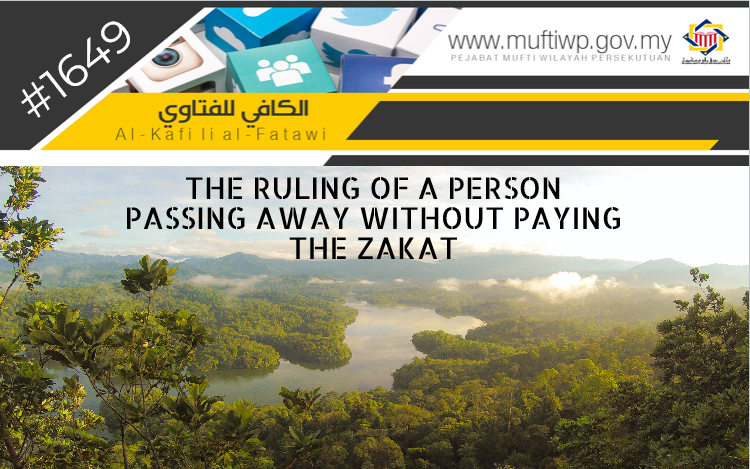 Assalamualaikum. What is the ruling of a person who passed away before paying his zakat? Is it the responsibility of the heirs to pay the zakat on his behalf?

Hope for an explanation from you. Thank you.

Allah SWT obligates the Muslim ummah to pay the zakat when the conditions for it are fulfilled, of which some of the property of the wealthy are given to the poor in order to purify their properties. Allah SWT states in the Quran:

“then tell them that Allah, the Mighty and Sublime, has enjoined on them a charity (Zakah) to be taken from their rich and given to their poor.”

Coming back to the above question, scholars have differing opinions regarding whether a person still has to pay the zakat after he has passed away if he didn’t get the chance to pay it when he was alive.

According to the opinion of Imam Abu Hanifah, if a person passes away before he gets the chance to pay his zakat, then the obligation for zakat is abrogated on him, except if he left a will stating that he wishes for his zakat to be paid from his inheritance. Thus, in this situation, a sum for the zakat should be paid of which it is of a third from the inheritance.

The reason is in their opinion, the ruling of paying zakat is wajib, its payment can be delayed (tarakhi) and its obligation is abrogated with death. (Refer al-Majmu’ Syarh al-Muhazzab, 6:226)

However, the majority of scholars including Syafi’iyyah scholars hold the opinion that if a person dies before he gets the chance to pay zakat while he was capable to do so when he was alive, then it is considered as a sin and it is wajib to pay the zakat using the money from the inheritance that he left before it is divided through faraid division to the rightful heirs even if it Is not in his will. The reason is the ruling on the payment of zakat according to the majority of scholars is an immediate (fauwri) wajib when the conditions are fulfilled, thus, if he delayed its payment until he is no longer capable to pay it, then he is considered as sinful and the obligation is not abrogated with his death.

“Whoever is obligated to pay the zakat and is capable to do so but did not fulfil it, then he passes away, it is wajib to be fulfilled using the inheritance he left. The reason is, it was an obligation right on him when he was alive and it is not abrogated due to his death the same as the debt of people.” (Refer al-Majmu’ Syarh al-Muhazzab, 6:225)

According to the above discussion, we are inclined towards the opinion of the majority of scholars which states that it is wajib to fulfil the zakat of a person who passes away using the inheritance he left if he did not get the chance to pay it while he was alive, while he was capable to do so. The reason is according to the majority of scholars, zakat is an immediate (fauwri) wajib when the conditions are fulfilled and the obligation is not abrogated with his death.

Thus, with this opportunity we would like to advise us all to not be negligent in fulfilling our zakat obligation until the day when our property and children are no longer of benefit to us except those who return to Him with a clean heart. Allah SWT states:

“The Day when there will not benefit [anyone] wealth or children. But only one who comes to Allah with a sound heart."