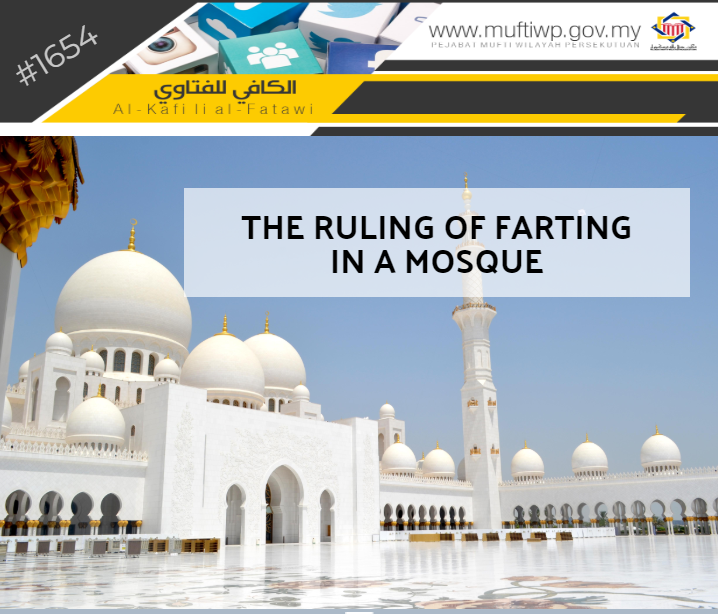 Assalamualaikum ustaz, I always wonder what is the ruling of farting in a mosque. Is it prohibited or permissible?

Mosque is a place of gathering for the Muslim ummah. Thus, it would surely involve the rights and manners between Muslims. Hence, there are numerous Quranic and prophetic evidences that explain the restrictions on actions that could disturb or cause discomfort for others. Among them is a hadith narrated by Anas bin Malik RA, he said the Prophet PBUH said:

“Spitting in the Masjid is a sin, and its expiation is to bury it.”

Thus, we could see that the act of spitting in the mosque is considered as wrong according to the Prophet PBUH. It is restricted for it would lead to ill feelings (discomfort/disgusted) for others who went to the mosque as well as dirtying the mosque.

The same is stated in a hadith narrated by Jabir bin Abdillah RA, where he said the Prophet PBUH said:

“The angels are also offended by the things that offend the children of Adam."

The above hadith contextually refers to the foul smell from people who ate garlic or onion. It is included as actions that are restricted by the Prophet PBUH. We have discussed this matter in AL-KAFI #1653 THE RULING OF ATTENDING THE CONGREGATIONAL PRAYER AT THE MOSQUE AFTER SMOKING OR EATING FOOD THAT STINK.

Whereas, Imam al-Nawawi in his commentary on the above hadith states:

“It is not haram to fart in mosques however it is best to avoid from doing so.” Refer Al-Majmu’ Syarah Al-Muhazzab, Al-Nawawi (2/175).

To conclude, we would like to state that it is makruh (undesirable) to fart in a mosque when there are a lot of other people around him for the foul smell will disturb others. However, if it is in an area where there is no one around, then this is fine for it does not disturb others.

Lastly, we pray to Allah SWT to be given the correct understanding in practising the religion. Amin.