AL-KAFI #1655: THE RULING OF NAMING ONE’S CHILD WITH THE NAME OF ALLAH SWT (UPDATED) 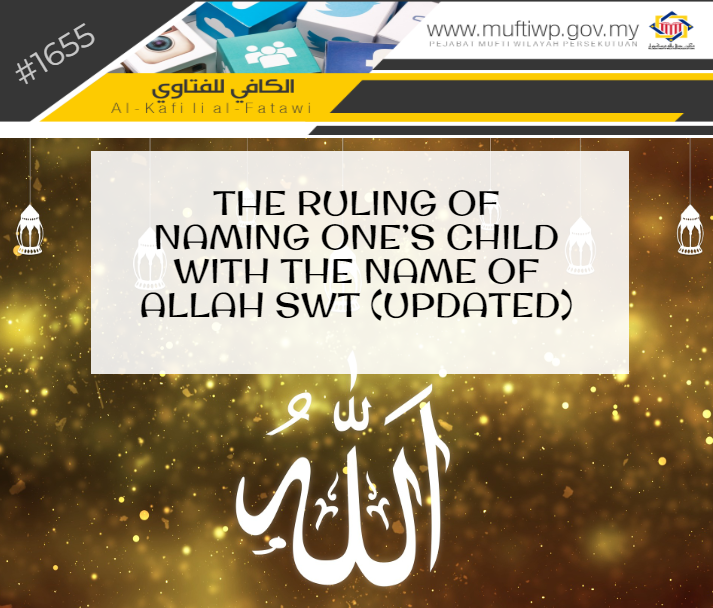 Assalamualaikum ustaz, is it permissible to name one’s child with one of the names of Allah SWT, such as al-Aziz?

Regarding the above issue, the names of Allah SWT are divided into two categories; some can be used and given as names for a person’s child and some which are prohibited to do so. For example, it is impermissible to give the name al-Khaliq (The Creator) to any creation for this attribute is specified for Allah SWT.

However, for other names such as Hakim (حكيم), Basir (بصير), Ali (علي) and others in the same category for their meaning can be owned by a creation. Furthermore, there are even Companions who have these type of names such as Ali bin Abi Talib and Hakim bin Hizam R.Anhuma. Thus, it is permissible to use names such as these.

The reason is, Allah SWT also describes some of His creations with these names. Among them is in His statement:

“Indeed, We created man from a sperm-drop mixture that We may try him; and We made him hearing and seeing.”

These names are also mentioned by Allah SWT when describing His creations. Allah SWT states:

Syeikh Zakaria al-Ansari explained that it is permissible to use the names of Allah of which are not specific for Him. He said: It is permissible to name one’s child with the names of Allah SWT of which are not specific (to Him). As for names which are specific for only Allah SWT, then it is haram. This is as explained by Imam al-Nawawi in Syarh Muslim. (See Asna al-Matalib Syarh Raudh al-Talib, 4/243)

The same matter is stated by al-Hanafiyyah scholars who said: Naming with the names of Allah as stated in His book such as al-‘Aliy, al-Kabir, al-Rasyid, al-Badi’ is permissible for they are associative names (in their meanings). It is meant on the rights of humans and do not mean the rights of Allah SWT. (See al-Buraiqah al-Mahmudiyyah, 3/234)

According to the above evidences and statements, if the names are specific for Allah SWT such as al-Ahad, al-Somad, al-Khaliq (the creator) and others, then it is prohibited and impermissible to be used for creations.

While names of which are not specific for Allah SWT and has a meaning of which are also an attribute that creations have, then it is permissible to be used, such as al-Aziz which means an honoured person among his people and other names like it.

May Allah SWT bless us with knowledge and understanding for us to obey His commandments. Amin.