AL-KAFI #1662: TALKING AFTER THE IQAMAH AND BEFORE THE TAKBIRATUL IHRAM 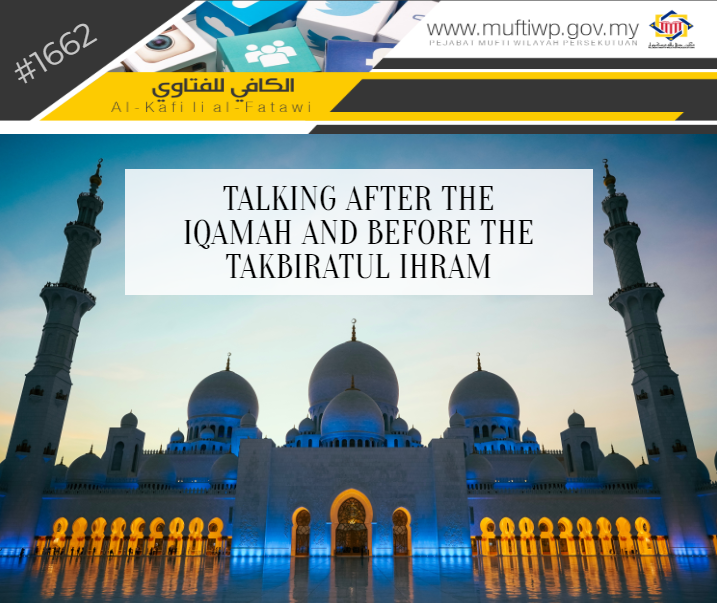 I have a question. What is the ruling of talking after we are standing for prayer (after the iqamah was called) but before the takbiratul ihram? Hope for an explanation.

We will start with the words of the Prophet PBUH:

“He who believes in Allah and the Last Day, must speak good or remain silent.”

As a Muslim, we are commanded to speak of good and beneficial matters and protect our tongues from uttering bad things that increase our sins.

The Ruling of Talking After Iqamah

Coming back to the question asked, actions performed after the iqamah is permissible and there is no need for the iqamah to be repeated. From a narration from Abu Hurairah RA, he said:

Once Iqama was pronounced and the people had straightened the rows, Allah's Messenger (ﷺ) went forward (to lead the prayer) but he was Junub, so he said, "Remain in your places." And he went out, took a bath and returned with water trickling from his head. Then he led the prayer.

“It shows the permissibility of a duration that separates between the iqamah and prayer (takbiratul ihram) because of the phrase ‘The he led prayer’, and literally it is understood that the iqamah was not repeated.” (See Fath al-Bari, 2/122)

In another narration from Abdullah ibn Umar R.Anhuma, the Prophet PBUH said:

"Arrange the rows in order, stand shoulder to shoulder, close the gaps,”

“The hadith shows the permissibility on talking between the iqamah and prayer (before takbiratul ihram). This is the opinion of our madhhab (madhhab Syafie) and the madhhab of the majority of scholars, although some scholars restrict it (talking after the iqamah). However, the accurate opinion is that it is permissible to talk, regardless of whether it is about the prayer or something else.” (See al-Minhaj Syarh Sahih Muslim, 4/157)

He also stated in another book:

“According to our madhhab (madhhab Syafie) and majority of scholars from Hijaz and others, it is permissible to talk after the call of iqamah and before takbiratul ihram. However, it is better to avoid talking unless it is a necessity. While Abu Hanifah and other scholars who are from Kufah are of the opinion that it is makruh (undesirable).” (See al-Majmu’ Syarh al-Muhazzab, 4/227)

According to the above discussion, we conclude that it is permissible to talk after the iqamah is called, even when a person is already standing in saf to start the prayer as long as it is before the takbiratul ihram. However, this should be avoided as to not disturb others who are preparing themselves to focus to pray and worship Allah SWT.

May Allah SWT give us all a clear understanding in practising religion. Amin.