AL-KAFI #1669: MIXING BREAST MILK WITH FORMULA; DOES THE RULING OF MAHRAM THROUGH NURSING APPLICABLE? 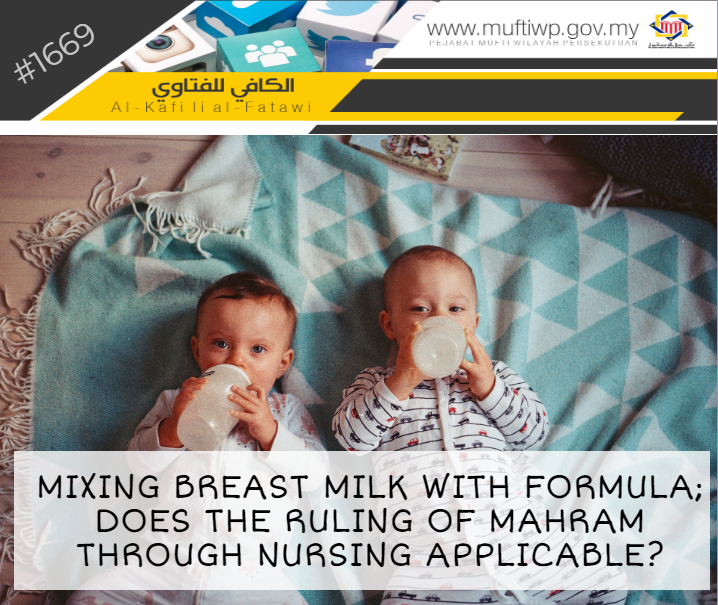 Assalamualaikum w.b.t. I adopt a child who is already 2 months old. I also took hormone pills in order for me to produce milk. However, my breast milk is so little and it is painful every time I pump it. And it is very hard for me to collect the milk even for one breastfeeding. A doctor advised me to mix breast milk with a little of formula milk. If I combine these two kinds of milk, will the child still be considered as my milk-child? Hope for an explanation. Thank you.

"But if you are in discord, then there may breastfeed for the father another woman."

Based on the above verse, the scholars state that the ruling for nursing is permissible. While the phrase (تَعَاسَرْتُمْ) refers to if a mother is hindered from nursing her child due to some reasons, then the child may be nursed by another women (other than the child’s mother). (Refer Al-Fiqh al-Manhaji, 2/191).

Nursing also causes a milk-child becomes a mahram to the family of his or her milk-mother and milk-father. This is in accordance with the hadith of the Prophet PBUH narrated by Ibn Abbas RA:

I am not legally permitted to marry her; as foster relations are treated like blood relations (in marital affairs). She is the daughter of my foster brother

Hence, one is prohibited to marry his milk-mother and all her relatives of which became his mahram through nursing with the condition of fulfilling requirements of the nursing and one of the conditions is five times breastfeeding until the baby is full. Further rulings on nursing may be referred to our related articles:

However, referring back to the question above, if one faces difficulty in producing breast milk, is it permissible for her to mix her breast milk with a little bit of formula milk? And does the ruling of a milk-child applicable?

According to madhhab al-Shafi’e and Hanafi, the scholars had discussed this matter as follows:

Imam al-Nawawi said: “And it is not with the condition of the milk staying at its original place (breast), if it changes to become sour or clotted or melts or becomes cheese… and it is fed to the child, then he (the child) will still be her mahram due to the milk being delivered to his stomach and he is full due to it, and if it is mixed with something like medication or etc. from halal things like water, goat’s milk or the haram things like liquor, if the breast milk is higher in concentration than the other, then mahram through nursing still takes place if he gets five times full due to it.” (Refer Raudhah al-Tolibin, 9/4)

“And in this condition (if the breast milk is mixed with others), the mixture should be drunk as a whole (by the child), only then the ruling of mahram through nursing takes place, and if the child only drink some of it (from the mixture), then the scholars have differing opinions on this. And the strong opinion is the mahram does not take place as it is unsure whether all of the milk (of the mother) is delivered into the child’s stomach, this is the opinion of Ibn Suraij, Abu Ishak and al-Mawardi”. (Refer Raudhah al-Tolibin, 9/5).

Hence, after analyzing the above discussion, we conclude this matter as the following:

The ruling of mixing breast milk with formula milk is permissible especially in exigent situations like mothers with the problem of having less milk due to sickness, hormonal imbalance or milk produced is through synthetic hormone. Mahram through nursing still takes place between this woman and the child, but some conditions should be fulfilled as follows:

We also advise the questioner and all mothers who experience the same problem to refer to the doctors and medical practitioners especially from the lactation department to get some guidelines and further guidance related to nursing and everything related to it.

May Allah give us all true understanding in religion. Ameen.