AL-KAFI #1706: THE RULING OF PERFORMING TARAWIH PRAYER WITH FAMILY MEMBERS AT HOME 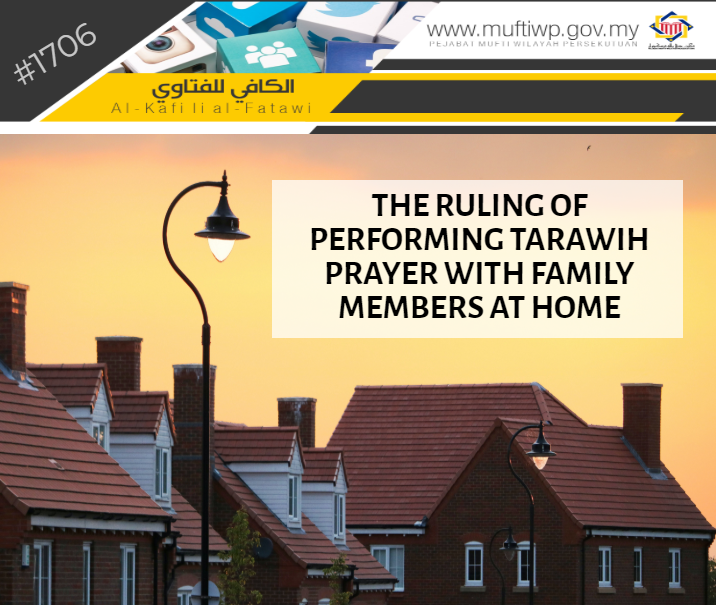 Assalamualaikum ustaz. Since we will be celebrating the arrival of the month of Ramadhan during the Movement Control Order, I ask for an explanation from you regarding the ruling of performing the tarawih prayer at home. Thank you.

The tarawih prayer is a greatly encouraged worship for every Muslim during the month of Ramadhan. A person is greatly rewarded for it and this is stated in a narration by Abu Hurairah RA, where he said the Prophet PBUH said:

"And whoever stood for the prayers in the night of Ramadhan out of sincere Faith and hoping for a reward from Allah, then all his previous sins will be forgiven."

The above hadith clearly shows that the act of qiyam in Ramadhan which includes tarawih prayer, recitation of the Quran, dhikr, supplication and others which are a form of worship performed on the night of Ramadhan, if it is performed with sincere faith of its sanctioning and hope to be rewarded by Allah SWT, surely all of the doer’s previous minor sins will be forgiven.

The sanctioning of tarawih prayer is stated in a narration from Umm al-Mu’minin A’isyah R.Anha, where she said:

“One night, Allah's Messenger (ﷺ) offered the prayer in the Mosque and the people followed him. The next night he also offered the prayer and too many people gathered. On the third and the fourth nights more people gathered, but Allah's Messenger (ﷺ) did not come out to them. In the morning he said, "I saw what you were doing and nothing but the fear that it (i.e. the prayer) might be enjoined on you, stopped me from coming to you." And that happened in the month of Ramadan.”

Syeikh Syams al-Haq al-‘Azhim Abadi when commenting on this hadith said: “The Prophet PBUH was worried that the tarawih prayer will be made as an obligation for them. The reason is it will lead for it to be an obligation if the action of congregational qiyam Ramadhan is performed continuously.” See ‘Aun Al-Ma’bud Syarah Sunan Abi Daud (4/180).

“And it is permissible (for the tarawih prayer to be performed) alone or in a congregation. Regarding which one is prioritized between the two, there are two famous opinions as stated by musannif and narrated by majority of scholars (al-Syafi’iyyah), for it to be performed in congregation is the sahih and agreed opinion among the ashab.”

To conclude, we end our statement with the following points: