AL-KAFI #1709: THE RULING OF PLAYING THE RECITATION OF THE QURAN AND DISREGARDING IT WHEN DOING BUSINESS 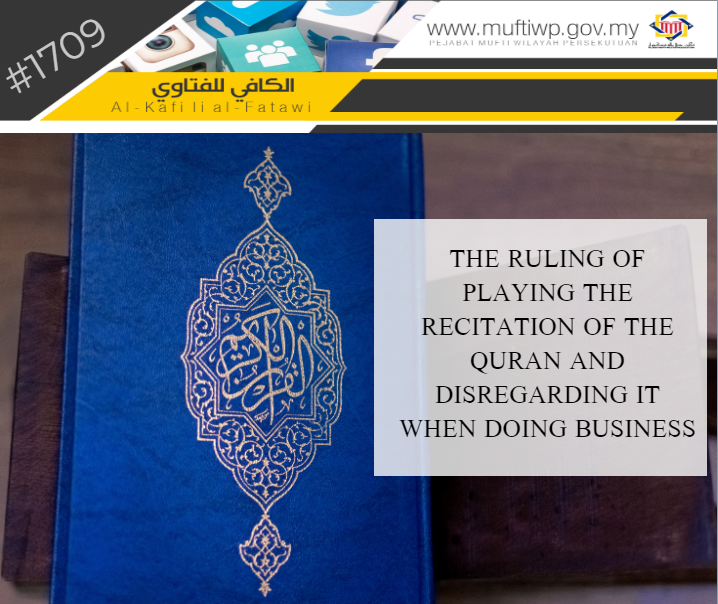 Assalamualaikum ustaz, recently I went to a shop to buy some stuff. In the shop, the recitation of the Quran is played during operating hours. At the same time, the owner would do his business, conversing to customers all the while the Quran is being played. My question is, aren’t we commanded to keep quiet and listen when the Quran is being recited? Is this act sinful? Hope for an explanation from you.

Al-Quran is the true words of Allah SWT and guidance for all mankind. Allah SWT commanded everyone to contemplate on the verses of the Quran so that they could learn and take lessons from it for every creation. Allah SWT states:

“[This is] a blessed Book which We have revealed to you, [O Muhammad], that they might reflect upon its verses and that those of understanding would be reminded.”

Ibnu Kathir stated that the Quran is the guidance for every truth and sahih matter and lessons are taken from it through clear contemplation and thoughts. (See Tafsir Ibnu Kathir, 7/63)

Coming back to the question presented, it focuses more to the verse of the statement of Allah SWT which narrates the manners of listening to the Quran.

“So, when the Qur'an is recited, then listen to it and pay attention that you may receive mercy.”

Imam al-Nawawi said matters of honouring and respecting the Quran should be emphasized in every aspect. In this matter, there are some people who are negligent and depreciate the manners of when a person recites the Quran. Thus, one should avoid laughing, whispering, or talking when the Quran is recited unless in unavoidable circumstances. (See al-Tibyan fi Adab Hamilah al-Quran pg. 92)

Dr Wahbah Zuhaili stated that not keeping quiet and listening to the recitation of the Quran when it is recited is greatly undesirable (major makruh). And for true believers, they are commanded to take note and always listen to the recitation of the Quran and be mindful of the manners of listening to the Quran. And one should be mindful of its manners in a tilawah al-Quran ceremony. (See Tafsir munir , 9/229-230)

In al-Mausu’ah al-Fiqhiyyah it is stated that listening and understanding the recitation of the Quran is an encouraged etiquette. Syeikh Abu Muhammad bin Abd al-Salam said it is fine to talk if there is a need. Furthermore, listening to the Quran is wajib if one does not have a permissible excuse by syara’. Among the permissible excuse by syara’ to leave the act of listening to the recitation of the Quran is when a person is busy working in a market to seek for sustenance and at home managing the household such as cooking and others. (See al-Mausu’ah al-Fiqhiyyah al-Kuwaitiyyah, 22/37; 4/86)

Coming back to the above question asked and the discussion presented, it can be concluded that it is not an offence and is permissible to not listen to the recitation of the Quran being played when one is busy working. However, a person should ensure that the environment and situation in the shop are not too loud and busy like in the markets and others. This is to ensure the honour of the recitation of the Holy Quran from unbeneficial talk and actions.

Moreover, you can also refer to our previous article AL-KAFI #579: THE RULING OF LISTENING TO THE QURAN for further explanation.

May Allah SWT give us all sahih understanding in His religion as well as bless us with taufiq and hidayah to obey all His commandments.