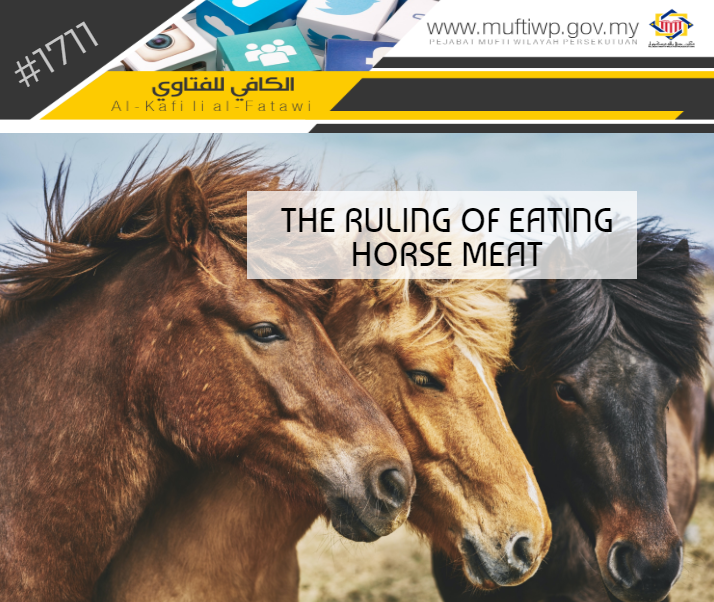 I have a question. I live overseas and recently I am gifted by a friend with horse meat. My question is, is it permissible for us to eat horse meat? Hope for an explanation pertaining to this matter.

We start with the saying of Allah SWT:

O mankind, eat from whatever is on earth [that is] lawful and good

Sheikh al-Sa’di already commented on this verse by saying that it is meant for all mankind whether they are among the believers or disbelievers to eat from whatever is on earth among the grains, fruits and animals which are permissible for them to take (to eat and take benefits from it), not through seizing, stealing, through prohibited dealings (selling and buying) or any prohibited actions. While toyyiban means not from bad things (dirty and filthy) like corpse, blood, pork and others. This verse is a dalil that the original rule for something (to eat and benefit from it) is permissible. (See Tafsir al-Sa’di, 1/80)

The ruling of eating horse meat

This is in accordance with a hadith narrated by Jabir bin Abdillah RA where he says:

We ate during the time of Khaibar the (flesh) of horses and of wild asses, but Allah's Messenger (ﷺ) prohibited us (to eat) the flesh of domestic asses

The same for a hadith narrated by Asma’ bint Abu Bakr R.Anhuma that:

We slaughtered a horse and ate it during the lifetime of Allah's Messenger (ﷺ).

There is an opinion which states that horse meat is makruh to be eaten. This opinion is related to Ibn ‘Abbas, al-Hakam, Malik and Abu Hanifah. (See al-Majmu’ Syarh al-Muhazzab, 9/4 and Taudhih al-Ahkam, Dar Ibn Hazm, 3/497)

Among their arguments is the saying of Allah SWT:

And [He created] the horses, mules and donkeys for you to ride and [as] adornment.

They said that the above verse indicates that Allah creates these animals as a ride and adornment. And Allah SWT does not state in the verse that its benefit is to be eaten. Therefore, this shows that there is no other benefit of the animals mentioned. Besides, a horse is grouped together with donkeys and mules which indicates that they share the same ruling which is haram (to be eaten). (See al-At’imah, by Dr. Soleh al-Fauzan, pg. 41-42 and al-Majmu’ Syarh al-Muhazzab, 9/4)

The same is the hadith narrated from Khalid bin al-Walid RA that:

The Messenger of Allah forbade eating the flesh of horses, mules and donkeys, and any predator that has fangs.

The hadith scholars and others have decided that the above hadith is dhaif (weak). And some of them said that it is abrogated (Mansukh). (See al-Minhaj Syarh Sahih Muslim, 13/96)

Based on the above discussion and arguments, we conclude that horse meat is halal and not makruh to be eaten. This is the opinion of the majority of the scholars as cited by Imam al-Nawawi.

Moreover, when one states some benefits from something, it does not deny its other benefits. Therefore, by stating horse as the ride and adornment, it does not indicate that its benefits are limited to only these two. However, they are specialised towards these two because they are the main purposes. This is because, normally, horses are made as a ride or adornments rather than them being eaten. (See al-Majmu’ Syarh al-Muhazzab, 9/5 and Taudhih al-Ahkam, Dar Ibn Hazm, 3/497)

It is enough with the hadith from Asma’ bint Abu Bakr to refute the claim by those who said that horse meat is haram to be eaten (or makruh) because the family of Abu Bakr RA will never do anything unless they know of its permissibility (to do so) because they are always with the Prophet PBUH. (See Minhah al-‘Allam fi Syarh Bulugh al-Maram, 9/206)