AL-KAFI #1790: IS IT MAKRUH TO USE WATER FROM WATER HEATER OR HOT TAP WATER? 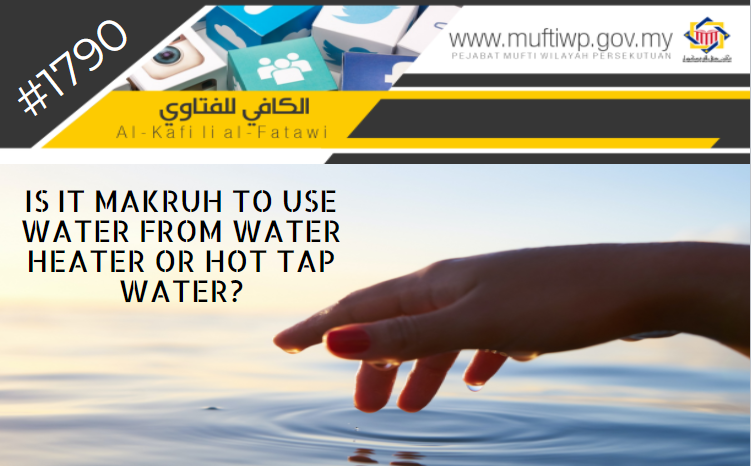 Assalamualaikum. I would like to ask a question on purification. Is it makruh to use water from the water heater or tap water which becomes hot due to the weather? Does the water be considered as musyammas which is makruh and prohibited to be used in purification? Thank you.

Also, heated water using a water heater does not fall under the category of musyammas water and is not makruh to be used as long as it is not very hot that it harms the body.

Purity is half of iman (faith)

“Water which is pure and purifying, which remains in its original form created by Allah SWT. The water is still considered as pure water even it changes due to long idle, contains sand, moss and stagnant place or its flowing place contains sulphur”

Coming back to the presented question, Imam al-Nawawi states that it is makruh to use musyammas water on one’s body like taking ablution and lifting hadas by citing the opinion mentioned by the author of al-Hawi where he said:

In answering the question with regard to this, the jurists have explained characteristics that make an amount of water become musyammas which is makruh to be used; water that is heated due to being exposed under the sunlight in a container made of steel in a hot country. Imam Jalaluddin al-Mahalli said:

“(And it is makruh to use musyammas water) which is the water heated under the sunlight used on one’s body because it is feared that one may be infected with vitiligo that vastly exists in hot countries like Hijaz in a container made from steel”.

Imam Ibn Hajar al-Haitami said that the conditions to be considered as musyammas water are when it is put in a container made from steel and is exposed under the sunlight in a country or place which weather is hot. He said that:

“Verily it will become (musyammas water) at a hot area during hot weather in a steel container (and the like)”.

Besides, being hot due to sunlight evades the water in a country with a hot climate and this does not include countries with medium-hot and cold weather like Egypt. Syarwani said in his hasyiah:

“(Verily, musyammas water is formed in a hot area) like Aqsa al-Sa’id, Yemen, Hijaz during hot weather, not in a place of medium weather like Egypt or cold like in Syam. So, musyammas water from these two countries is not makruh, even during summer like what is clearly stated from their statement. This is because sunlight in both countries is weak”.

Regarding water boiled on fire or using water heater, they are not regarded under musyammas water like what is explained by the scholars. Therefore, it is not makruh to use heated water as long as it does not harm oneself. This is mentioned by Ibn Hajar al-Haitami:

“And it is not makruh like water boiled on fire, even by major najis”

Hence, based on the presented question and explanation, it is clear that water exposed under hot sunlight in this country is not ruled as musyammas which is makruh to be used. This is because our country has a medium level of climate and does not meet the conditions set by the scholars as explained.

Also, water heated in the water heater is not categorised under musyammas water, and even is not makruh to be used as long as it is not too hot that it may cause harm to oneself.