AL-KAFI #1822: THE RULING OF MAKING THE CRYPTOCURRENCY AS MAHR 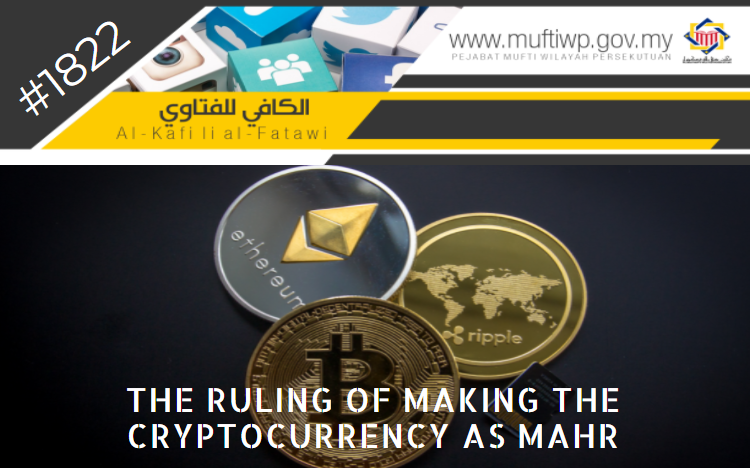 Assalamualaikum. I have a question. Is it permissible to use cryptocurrency as mahr? Thank you.

Next, there is no specific limit for one’s mahr whether the minimum or maximum limit. Conversely, all valuable items and able to be sold or made as loan may become the mahr whether it is in the form of ‘ain (physical item), loan, or benefit. The same goes for in terms of quantity whether it is small or many like a car, 1000-dirham cash money or a house. In fact, mahr may also be given in the form of teaching service like teaching the recitation of al-Quran to the wife.

This aligns with the saying of Allah SWT:

And lawful to you are [all others] beyond these, [provided] that you seek them [in marriage] with [gifts from] your property,

This verse mentions property (المال) in general without stating its form or value in specific. Also, there is guidance from the Prophet PBUH through his hadith:

'Give her something, even if it is an iron ring.'

In the hadith narrated by Amir bin Rabi’ah RA, it is stated on such stance more precisely. The hadith states:

a woman of the B. Fazara was married for a dower of two sandals. When God’s Messenger asked whether she was satisfied with two sandals regarding her person and her property and she replied that she was, he gave his approval.

Pertaining to cryptocurrency, the first statement of the Central Bank of Malaysia (CBM) on Bitcoin was endorsed on 2nd January 2014 on their official website. In that brief statement, CBM stresses out that Bitcoin is not considered as a legal tender in Malaysia and CBM also does not manage the operation of Bitcoin, so the public is advised to beware of the risk which may appear from the usage of digital currency as such. [1]

However, cryptocurrency is still not yet considered valid like the Ringgit Malaysia (RM) and etc but is considered a commodity item that is tradeable and may be made an asset for any investment. [2] Based on this concept, cryptocurrency is valid to be made as mahr as it is a valued item like other items as well.