IRSYAD AL-HADITH SERIES 24: THE ISSUE ON TASHIH HADITH BY CONTEMPORARY SCHOLARS AND IS THERE ANY WEAK NARRATION IN SAHIH AL-BUKHARI? 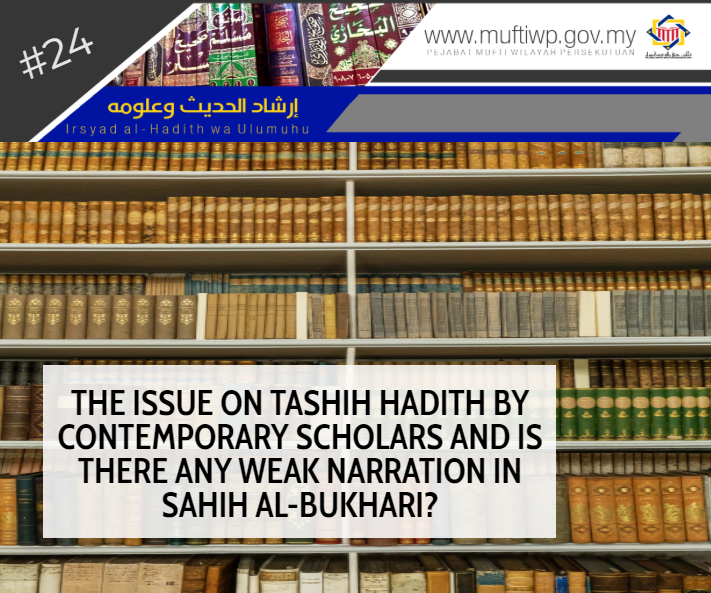 What is your opinion on tashih hadith made by contemporary scholars? Is there any hadith which is weak in its usul narrated in Sahih al-Bukhari?

As stated by Dr Muhammad Ijaj al-Khatib in his book entitled al-Sunnah al-Nabawiyyah, this is his answer:

In conclusion, in the issue pertaining to tashih and tahsin of the hadith as well as stating the rule of the hadith as dha’if and mawdu’, it is possible to be done by the experts in hadith who comply with the set conditions. Among the requirements needed by a mujtahid is adil, have knowledge in the method of jarh wa ta’dil (in determining the narrators), understanding the methods of the past scholars and etc. All these should be learnt in-depth. Therefore, it is not an easy thing as it needs ilm al-rijal (knowledge regarding to the narrators) to know each narrator personally in the sanad, and not simply taking from the words of some scholars. In fact, each mujtahid should see the whole picture before deciding on the ruling of something. Moreover, if there is a hadith which is not stated on its ruling whether it is sahih or hassan, so, it cannot become a hujah unless after it is evaluated and studied by considering things like the condition of the narrators as well as gathering all riwayat, mutaba’at and syawahid. If this is not done, then it is enough for us to just hold on to the opinions of the past scholars in determining the status of a hadith.

May this explanation give us all better understanding in religion. Ameen.