IRSYAD AL-HADITH SERIES 231: DEEDS ARE PRESENTED ON MONDAYS AND THURSDAYS 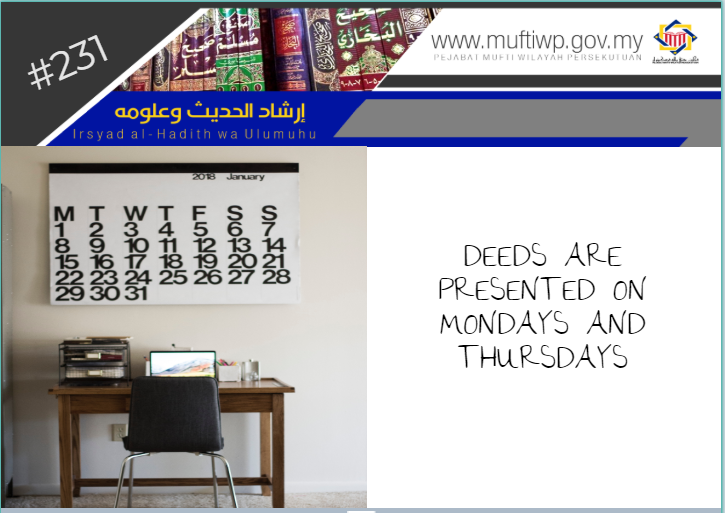 Is there a hadith stating that deeds are presented on Mondays and Thursdays?

Allah SWT created humans with the purpose of devoting themselves to Allah SWT. Furthermore, Allah SWT also commanded His slaves to obey His commandments and avoid His prohibitions.

“And I did not create the jinn and mankind except to worship Me.”

“Man does not utter any word except that with him is an observer prepared [to record].”

The above verse describes that for every act of a human, it will be recorded by the angels and presented in front of Allah SWT. While in regards to the question asked, there are several hadith that mentioned it. Some of them are:

"Deeds are presented on Monday and Thursday, and I love that my deeds be presented while I am fasting."

“Those are two days in which deeds are shown to the Lord of the worlds, and I like my deeds to be shown (to Him) when I am fasting.”

Ibn Hajar said, it also does not repudiate the fact that deeds are lifted in the month of Sya’ban as stated in the hadith of the Prophet PBUH, where the Prophet PBUH said: “It is a month in which the deeds are taken up to the Lord of the worlds, and I like that my deeds be taken up when I am fasting.” This shows that deeds that are taken up to Allah weekly are specific deeds, while the general deeds are lifted annually. (See Tuhfah al-Ahwazi, 375/3)

Among the lessons that we could take from this hadith is that all deeds are lifted and presented to Allah SWT, whether it be taken up once a year in the month of Sya’ban as stated by the Prophet PBUH or lifted weekly on Mondays and Thursdays. (See Hasyiah Ibn al-Qayyim of Sunan Abu Daud, 12:313)

Another wisdom from this hadith is the benefit of fasting on Mondays and Thursdays. Thus, it is sunnah (encouraged) for us to fast on these two days as stated in madhhab al-Syafie Rahimahullah, in accordance with the words of the beloved wife of the Prophet PBUH:

From Aisyah RA, she said:

“The Prophet PBUH used to try to fast on Mondays and Thursdays.”

As a conclusion. We are encouraged to fast on Mondays and Thursdays in accordance with the above stated hadith. Among the wisdoms we are asked to fast on these days is, our deeds are presented by the angels to Allah SWT on these two days. Lastly, may Allah SWT make us from among the believers who are consistent in their worship towards Him. Amin.