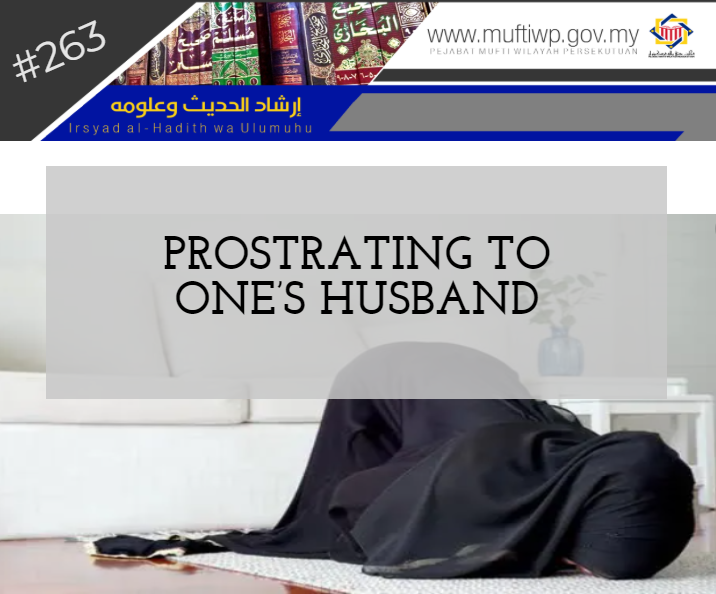 Is there a sahih hadith which mentions about a wife prostrating to her husband?

In married life, a wife is obligated to obey her husband in ma’ruf matters. The reason is her obedience would ease her way towards paradise and this is stated in a hadith which is evaluated as sahih by Imam Ibn Hibban:

“If a woman prays five times a day, fasts in its month (Ramadhan), protect her privates (dignity) and obeys her husband. Then, she shall enter Paradise from whichever door she so wishes.”

In answering the above question, the hadith which mentions about prostration to one’s husband is narrated by the companions of the Prophet PBUH. Among them are Abu Hurairah, Mu’az bin Jabal, Suraqah bin Malik, Aisyah, Ibn Abbas, Abdullah bin Abi Awfa, Ummu Salamah, Anas bin Malik and several others. As for the matan of the hadith, it is as follows:

Sunan al-Tirmizi (1159) [Imam al-Tirmizi this hadith from the narration path of Abu Hurairah RA is hasan gharib] This hadith is also stated as sahih by Imam al-Hakim in al-Mustadrak through the path of Mu’az bin Jabal (See al-Mustadrak, 190/4)

Among the matters that can be understood from this hadith is that it is an obligation of a wife to obey her husband and prostration is impermissible for anyone except Allah SWT. The reason is there are numerous rights of a husband that a wife may not be able to fulfil.

Imam al-Syaukani said, the meaning of this hadith is if prostration for another person is permissible, surely the Prophet PBUH would ask the wives to prostrate to their husbands. (See Tuhfah al-Ahwazi, 272/4). In Musnad Ahmad, from Anas bin Malik RA, the Prophet PBUH said:

To conclude, the above hadith is sahih and it does not show the permissibility of a wife to prostrate to her husband. The reason is prostration is only permissible for Allah SWT and it is impermissible to prostrate to other than Allah SWT as it is clearly prohibited by the Prophet PBUH in a hadith in the Musnad Ahmad. However, this hadith shows the higher status of a husband and it is obligated for his wife to obey him in everything that he instructed as long as it does not contradict with the religion. Lastly, may Allah SWT bless us with righteous husband and wife so that our marriage is built with the blessings from Allah SWT. Amin.