IRSYAD AL-HADITH SERIES 276: THE BEST OF MY UMMAH ARE THOSE WHO RECITE THE QURAN 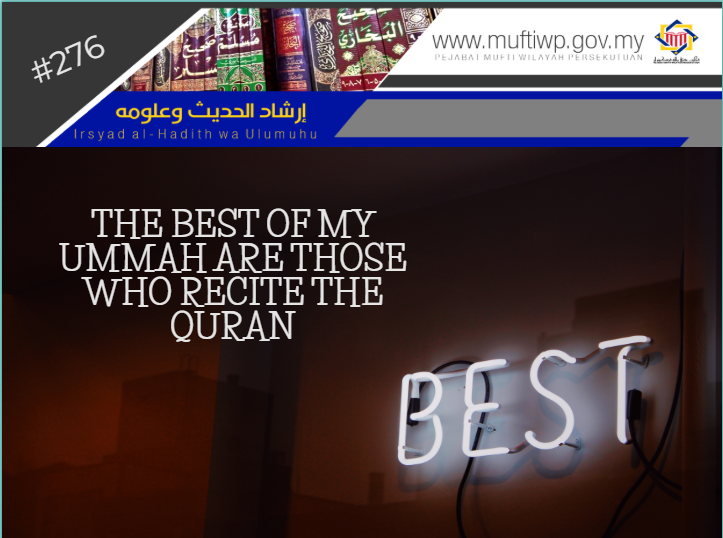 Assalamualaikum ustaz. What is the status of the hadith “The best of my ummah are those who recite the Quran,”? Thank you.

Waalaikumussalam. Alhamdulillah, praise and thanks to Allah for the many countless blessings He has blessed us all with. Blessings and salutations to the prophet Muhammad PBUH, his family, companions and all those that follow his teachings to the day of judgement.

The above hadith is recorded by al-Baihaqi in Syu’ab al-Iman from Nukman bin Basyir. The Prophet PBUH said:

“The best worship of my ummah are those who recite the Quran.”

Regarding the question asked, al-Hafiz al-Iraqi commented on the above hadith, stating the sanad of the hadith is weak [1]. The reason is, the credibility of two of the narrators is questionable. The two narrators are:

However, the weakness of the sanad of the hadith does not deny that the matan of the hadith has a sahih meaning. The benefit of reciting the Quran is stated through the verses of the Quran and sahih hadiths. Some of it is the statement of Allah SWT:

“Indeed, those who recite the Book of Allah and establish prayer and spend [in His cause] out of what We have provided them, secretly and publicly, [can] expect a profit that will never perish,”

The above verse means that for those who recite the Quran they will never experience loss but will receive a huge profit.

Sunan al-Tirmizi (2910). He states that the hadith is hasan.