IRSYAD AL-HADITH SERIES 285: THE ADVANTAGES OF WEARING OR PUTTING ON KOHL/ANTIMONY ON THE DAY OF ASYURA’ 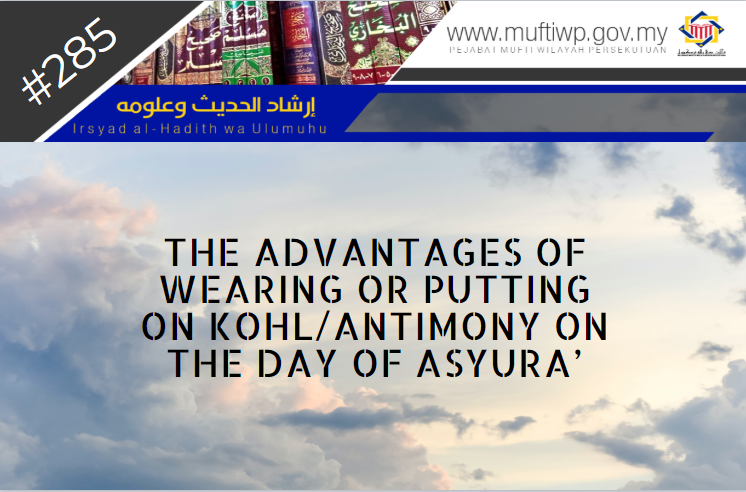 “Whoever put on kohl with ithmid (a type of kohl) on the day of Asyura’, then he will not experience any illness on his eyes forever.”

The day of Asyura’ or the 10th of Muharram is one of the honoured days for it is sunnah for us to fast on this day and we are also encouraged to increase our worships on this day according to several sahih hadiths, among them are:

I never saw the Prophet (ﷺ) seeking to fast on a day more (preferable to him) than this day, the day of 'Ashura', or this month, i.e. the month of Ramadan.

Among the opinion of scholars that state the status of this hadith are:

Considering the above opinions of scholars, we are inclined to state that the above hadith presented in the question is not sahih even though there are some scholars who stated that the hadith is dhaif (weak) such as Imam al-Suyuthi (911 H) in his book al-Jami’ al-Saghir. However, here we include two opinions regarding the hadith of putting on kohl on the day of Asyura’:

“Among the hadiths that are related regarding the usage of kohl on the day of Asyura’, beautifying oneself, treating (family members), praying and others has advantages, none of them are sahih and none of the hadith are from the Prophet PBUH except for hadiths regarding fasting on the day and others are all bathil (not sahih).” (See: al-Manar al-Munif, 111/1)

“Every narration that is narrated related to the day of Asyura’ where it states the advantages of putting on kohl, adorning oneself and taking a bath on the day are not sahih.” (See: Latha’if al-Ma’arif, 54/1)

Furthermore, Syeikh Yusuf al-Qaradhawi also criticizes the hadith regarding wearing kohl on the day of Asyura’ in his book Fiqh al-Siyam in the chapter that discusses fasting on the day of Asyura’. However, wearing kohl is sunnah for both woman and man for the Prophet PBUH puts on kohl on his eyes. This is in accordance with a hadith narrated by Ibn Abbas R.Anhuma where the Prophet PBUH said:

"Use Ithmid for Kohl, for it clears the vision and grows the hair (eye-lashes)."

Coming back to the question asked, the hadith below is related to the advantages of wearing kohl on the 10th of muharram is not sahih as have been stated above.

“Whoever put on kohl with ithmid (a type of kohl) on the day of Asyura’, then he will not experience any illness on his eyes forever.”

However, wearing kohl is sunnah for both men and women at any time not specifically only on the 10th of Muharram according to the general hadith of Ibn Abbas RA. Lastly, let us all increase our worship such as fasting on the day of Asyura’ and other worships. May Allah SWT grant us the strength and accept all our worships that we do. Amin.