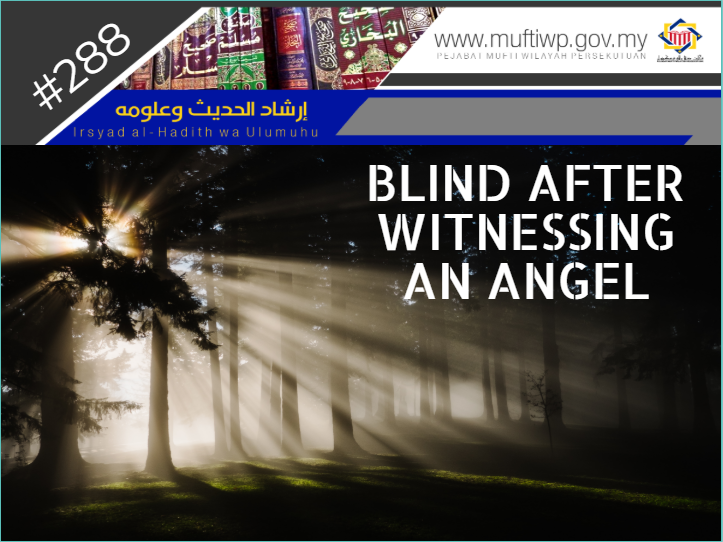 Assalamualaikum Dr, I’m sorry to disturb you. I just want to ask is there any truth regarding a story about a companion of the Prophet PBUH who saw an angel and turned blind?

Believing in angels is one of the pillars of belief. Hence, it is an obligation for us as believers to believe in the existence of angels. Furthermore, angels are created by Allah SWT from light, as stated by the Prophet PBUH:

“Angels were created from light,”

In answering the above question, humans are incapable of seeing angels in their true form. This is stated by Syeikh Sulaiman al-Ashqar under the chapter of witnessing angels:

“Angels are created from light, and thus, humans are incapable to see them. Furthermore, Allah SWT did not create our eyes with the ability to see angels. Hence, this ummah is incapable to see angels in their original form with the exception of the Prophet PBUH. The reason is, the Prophet PBUH has witnessed Jibril (Gabriel) in its true form twice. There are however evidences stating that humans are able to see angels after they have transformed from their original form into human.” (See ‘Alam al-Malaikat al-Abrar,10/1)

“That was Jibril. He came to teach you your religion.”

The above hadith is an evidence that proves humans are able to see angels if the angel is in human form but not if the angel is in its original form. Thus, witnessing an angel in its original form is impossible for this ummah except for the Prophet PBUH. In regards to the question asked, we did not find any narrations regarding a companion of the Prophet PBUH who turned blind after he saw an angel.

To conclude, believing in the angels is one of the obligatory pillars of faith for every believer. However, witnessing angels (not in their original form) is not an impossibility for it has happened more than once before during the time of the Prophet PBUH. Lastly, may Allah SWT protect our faith and make us be among His slaves who are successful in this world and the hereafter. Amin.