IRSYAD AL-HADITH SERIES #292: BUSINESS IS THE GREATEST SOURCE OF LIVELIHOOD 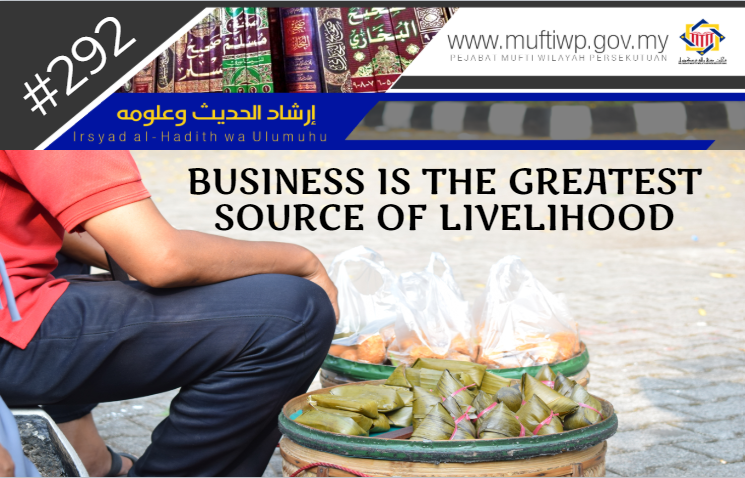 Is the hadith regarding 9/10 of livelihood is from business true?

According to the above question, we include the famous hadith in our society:

“You should conduct business, for in it is 9 out of 10 livelihoods.”

Both hadiths are commonly heard in sermons regarding sustenance and livelihood in our country. However, is it true that these hadiths are from the Prophet PBUH or just words of wisdom from scholars? Hence, in this series of Irsyad al-Hadith, we will explain this issue.

Here, we include several opinions of scholars in stating the status of this hadith:

Imam al-Iraqi (806 H) extracts and authenticates the status of the hadith in his book Ihya’ Ulumuddin saying: Ibrahim al-Harbi said in Gharib al-Hadith that the hadith is from Nu’aim bin Abd al-Rahman and the narrators are thiqah (trustworthy). It is said that Nu’aim is a companion of the Prophet as stated by Ibn Mandah, but the claim is false. Abu Hatim al-Razi and Ibn Hibban said that Nu’aim is a tabi’in and thus the hadith is mursal (the companions of the Prophet PBUH is missing in the chain of narrators where it stopped at tabi’in and straight to the Prophet PBUH). (See al-Mughni: 419/1)

Referring to the above opinions of scholars, we are inclined towards the opinion that state the above hadith is weak for there is a gap (between the tabi’in and the Prophet PBUH) in the chain of narrators of the hadith. Even though the hadith is weak, business and trade are considered as an honourable work to provide for one’s livelihood. The reason is, the Prophet PBUH himself is a businessman before and after he was appointed as the prophet and messenger of Allah SWT. This is recorded in books regarding the life of the Prophet PBUH where he would follow his uncle to Syria for business trips. Furthermore, the Prophet PBUH also helped his beloved wife Khadijah bin Khuwailid in her business and trade.

Moreover, there are numerous companions of the Prophet PBUH who were involved in business and trade. Among them are Abu Bakar al-Siddiq, Uthman bin Affan, Abdul Rahman bin Auf, Zubair bin al-Awwam, Sa’ad bin Abi Waqqas, al-Barra’ bin Azib and many others. Furthermore, Imam Abu Hanifah who is the founder of madhab Hanafi was also a businessman. There are many other stories that prove business and trade is an excellent source of livelihood for someone.

To conclude, the hadith that is stated at the beginning of our discussion is mursal or weak for its narration is broken. However, the meaning is true, where business or trade is a great source of livelihood for people. Islam greatly encourages its followers to seek wealth and comfort in life and business is a great example for this. However, at the same time, Islam set guidelines for everything that we do so that it is in accordance with what Allah SWT asked from us. This is in line with a hadith from Abu Sa’id RA, where the Prophet PBUH said:

"The truthful, trustworthy merchant is with the Prophets, the truthful, and the martyrs."

Sunan al-Tirmizi (1209). This is a hasan (good) hadith according to Imam al-Tirmizi.

Furthermore, there is a hadith that every one who is involved in business or trade should contemplate on, where the Prophet PBUH said:

“Indeed, the merchants will be resurrected on the Day of judgement with the wicked, except the one who has Taqwa of Allah, who behaves charitably and is truthful.”

Sunan al-Tirmizi (1210). [the hadith is hasan sahih according to Imam al-Tirmizi and authenticated by Imam Ibn Hibban in his sahih]

Lastly, let us all be among the people of taqwa to Allah SWT in everything that we do. May Allah SWT make us from among His slaves who really believe and be successful in this world and the hereafter. Amin.