IRSYAD AL-HADITH SERIES 294: SA’AD BIN MU’AZ AND THE SQUEEZING OF THE GRAVE 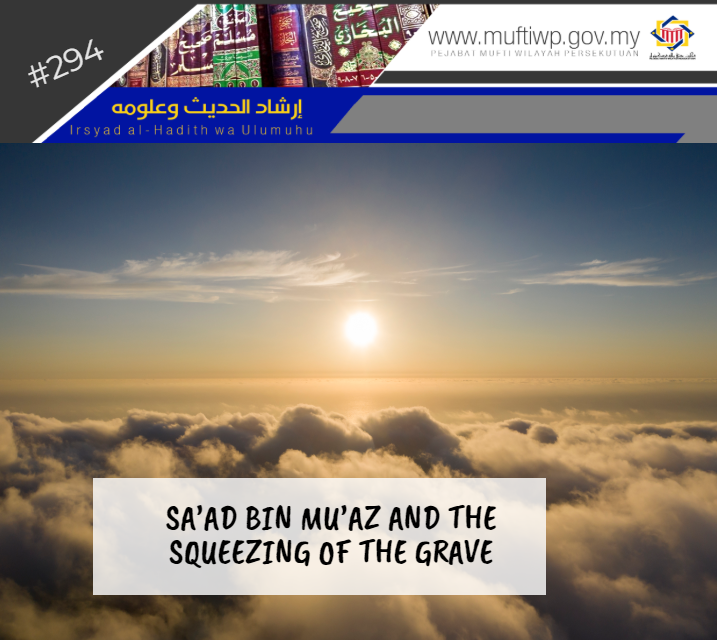 Sa’ad embraces Islam in the hands of Mus’ab bin Umair RA when the Prophet PBUH first sent him before the Prophet PBUH migrated to Medina to teach the Muslim ummah there on matters related to Islam. Sa’ad bin Mu’az passed away in the year when the war of Khandaq broke where he sustained injuries that led to his death from the war of al-Khandaq. (See Tahzib al-Asma’ Wa al-Lughat, 214-215/1)

Sa’ad bin Mu’az passed away in the fifth year of Hijrah and the Arasy was shaken because of his death. This matter is stated in a sahih hadith narrated by Jabir bin Abdillah RA, he heard the Prophet PBUH said:

"The Throne (of Allah) shook at the death of Sa`d bin Mu`adh."

Scholars stated that this hadith shows that the angels were happy to welcome Sa’ad bin Mu’az knowing his status. In another narration, there are mentions of the story of the death of Sa’ad bin Mu’az that explains his advantages and honour:

“Indeed, the angels were carrying him.”

As for the narration of Sa’ad bin Mu’az was squeezed by the grave because of the way he purified himself after he urinates is mentioned in al-Tazkirah by Imam al-Qurthubi and Syarh al-Sudur by Imam al-Suyuthi. The same is stated by Imam Ibn Sa’ad in his Tabaqat. However, this narration or story is criticized by Imam Ibn al-Jauzi. He said that the narration is maqtu’ for the sanad is disconnected because of al-Hasan, for he did not have the chance to meet Sa’ad. Furthermore, one of its narrators named Abu Sufyan Tharib bin Syihab is a matruk (his narrations are left/disregarded) narrator as stated by Imam al-Nasaie. (See al-Mawdhu’at, 234/3)

Moreover, al-Hafiz Ibn Kathir cited the opinion of Imam al-Baihaqi regarding the narration about Sa’ad bin Mu’az who failed to properly purify himself after urinating is an odd athar (narration). (See al-Bidayah wa al-Nihayah, 147/4)

Furthermore, Imam al-Zahabi said the narration is muqathi’ (disconnected). (See Siyar A’lam al-Nubala’, 182/3). Syeikh al-Albani stated that the narration that states Sa’ad bin Mu’az is squeezed by the grave because of his way of purifying himself after urinating is a mungkar narration. (See Silsilah al-Ahadith al-Dha’ifah wa al-Mawdhu’ah, 319/7). Syeikh Syu’aib al-Arna’outh evaluates the narration of Ibn Sa’ad in al-Tabaqat as dha’if (weak) when he tahqiq Siyar A’lam al-Nubala.

Thus, we are inclined towards the opinion which states the story or narration is dhaif (weak) for its sanad is disconnected and the trustworthiness of the narrator in narrating a hadith is disputed. However, there is a sahih narration that recounts the relationship of Sa’ad bin Mu’az and the squeezing of the grave below. However, we should understand it with an accurate understanding. Among the narrations are:

“If a person is saved from the squeezing of the grave, then Sa’ad bin Mu’az will be saved. He is briefly squeezed, then released.”

“Indeed, there is a squeezing of the grave, if a person is saved from it, then Sa’ad bin Mu’az will be saved from it.”

Among the meanings understood from both of the above hadith, it shows Allah SWT has set the squeezing of the grave for every person that died. If a person is saved from it, then it is an advantage for him in Allah SWT’s view and the deceased’s close relationship with Allah SWT. For this, Sa’ad bin Mu’az is one of the people who will be saved from the squeeze. Thus, this shows the high status of Sa’ad bin Mu’az in Islam after overcoming various trials and tribulations to honour Allah SWT’s religion and protecting the Prophet PBUH.

As a conclusion, Sa’ad bin Mu’az is one of the honoured and esteemed companions of the Prophet PBUH. Thus, Allah SWT honoured him extraordinarily that Allah SWT’s ‘Arash shook on the day of his death. As for the narration about the story of Sa’ad bin Mu’az being punished with the squeezing of the grave because he did not properly purify himself after urinating is dhaif as we stated above. For further explanation on the squeezing of the grave, please refer to our previous article Irsyad al-Hadith Series 290. Lastly, may Allah SWT save us from the fitnah of the grave and make us from among the righteous and pious people. Amin.