IRSYAD AL-HADITH SERIES 298: COMMENTARY ON THE HADITH OF THE THREE SIGNS OF HAPPINESS 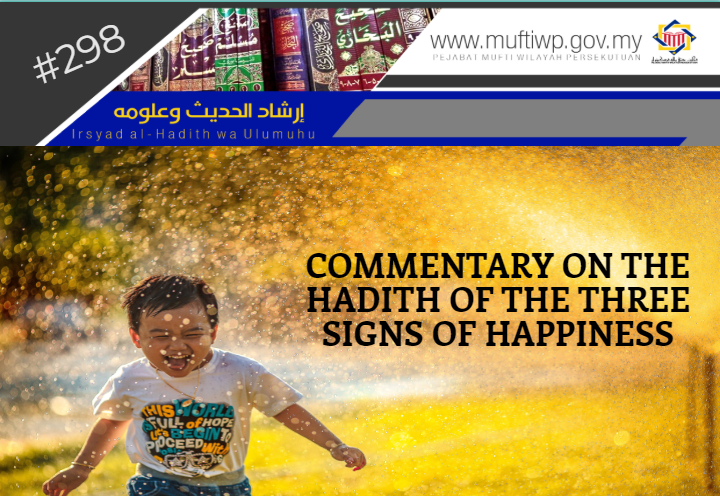 Assalamualaikum ustaz. I have a question. There is a hadith that states the three signs of happiness are; a good neighbour, a huge house and a good vehicle. Does this mean that we have to work hard to attain a good vehicle and a huge house in order to be happy? Hope for an explanation from ustaz.

The hadith you mentioned in the above question is an authentic hadith. It is narrated by Nafi’ bin Abdul Harith from the Prophet PBUH. The Prophet PBUH said:

"Part of the happiness of the Muslim man includes a spacious dwelling, righteous neighbour and a good mount,"

We have explained in detail regarding the status of this hadith in Irsyad al-Hadith series 297 [1]. In the hadith, the Prophet PBUH explained that a huge house, a pious neighbour and a good vehicle is among the signs a person is happy. How do these three things is a sign of happiness in a person’s life?

A huge house is among the factors stated by the Prophet PBUH as a sign of happiness. The reason is, a huge house calms one’s heart and remove uneasiness. Imagine living in a cramped and small house. It would surely troubling and upsetting a person. Thus, the Prophet PBUH supplicates:

“O Allah, forgive me my sin, and expand for me my abode, and bless for me that which You have provided me,”

A pious neighbour is also a factor of happiness for a person. A person would feel calm and safe if he live next to a neighbour who is good, responsible, obedient towards the commandments of Allah SWT and who are also not resentful or envious and others.

Al-Munawi explained that the meaning of a pious neighbour is a neighbour who does not harm others. Refer Faidh al-Qadir (3/302).

A good or pious neighbour does not harm others. Whether it is through his words or actions. He would always give good advice, opinion, and advise us against our mistakes properly. Just look at the relationship between Umar and his neighbour. If Umar is unable to attend a sermon of the Prophet PBUH, he would tell Umar about what was said in the sermon and vice versa. This means, living harmoniously with one’s neighbour is benefitting each other. There is a wise saying stating:

Ibnu Hajar al-Asqalani said that a pious neighbour is a person who does not harm us and always supplicate good things for us. Refer Subul al-Salam Syarh Bulugh al-Maram (4/166)

A good vehicle or mode of transport is a facilitation that ease a person’s life. It helps a person to travel from one place to another. In previous times, a good mount is among a blessing in a person’s life. It is considered as a vehicle to ease one’s travels. Al-Munawi explained the meaning of a good mount as a vehicle that is fast, comfortable and easy to travel in. It will shorten the duration of one’s travels to meet friends without any hardships. Refer Faidh al-Qadir (3/422)

A good vehicle also calms one’s heart. It distances ourselves from worry and concern. Afterwards, it is used to remember and praise Allah SWT. Imagine a person who has a problematic car where his car will break down frequently. It will result in him getting easily anxious and angry as well as other negative feelings for his travels are delayed. Imam al-Tahawi said:

“It (a good vehicle) distances one’s heart from worry and concern. A good vehicle will enable its owner to have time to remember Allah or others rather than worrying over his vehicle which will harm people who rides it.” Refer Bayan Musykil al-Athar (7/43)

This is the explanation of the mentioned hadith in the above question. May Allah SWT give us the correct understanding. Wallahua’lam.