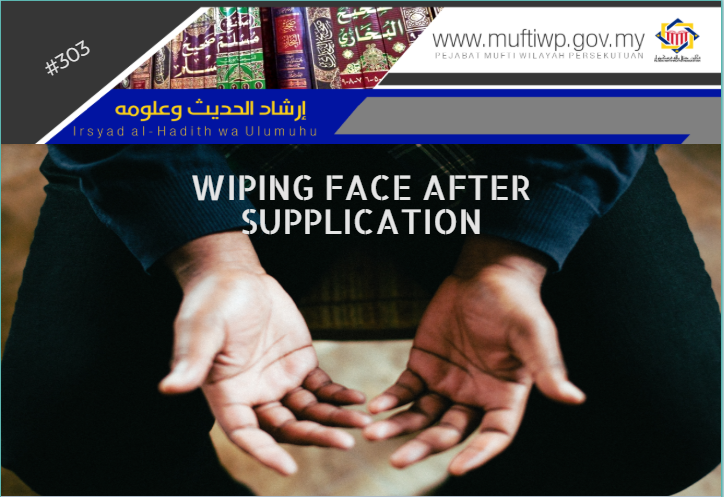 Is it permissible to wipe one’s face after supplication?

Supplication is one of the encouraged worships for every Muslim, regardless whether he is in ease or hardship. The reason is, supplication is a direct connection between someone and his God. According to the above question, there is a hadith that states the Prophet PBUH will never put his hands down after supplicating without first wiping his face.

“Whenever the Messenger of Allah would raise his hands in supplication, he would not lower them until he had wiped his face with them.”

Imam al-San’ani states that the above hadith has several syawahid (supporting evidences). Among them is from Abu Daud from a narration of Ibn Abbas R.Anhuma and others. Thus, all the other narrations raised the status of the hadith to hasan. (See Subul al-Salam, 709/2)

Syeikh al-Mubarakfuri said the hadith is an evidence for the sanctioning of wiping face with both hands after supplication. It is said that since Allah SWT will not forsake the supplication of any of His slaves, then it is as though the blessing from Allah falls down on both of the hands. Thus, these hands are placed on the face, the most honoured body part of humans. (See Tuhfah al-Ahwazi, 232/9)

Furthermore, Imam al-Nawawi also state that wiping face after supplicating is included as one of the manners in supplication. This is stated in al-Majmu’:

“Among the manners of supplication is choosing the appropriate time, place and situation, facing the qibla, raising the hands and wiping one’s face after supplication.” (See al-Majmu’, 655-656/4)

To conclude, wiping the face after supplication is included as one of the manners of supplication but if someone does not wipe his face, it is not an offence for it is not an obligation. Lastly, may Allah SWT give us understanding in this religion. Amin.