IRSYAD AL-HADITH SERIES 351: WHO WILL BE THE HUSBAND OF A WOMAN IN PARADISE? 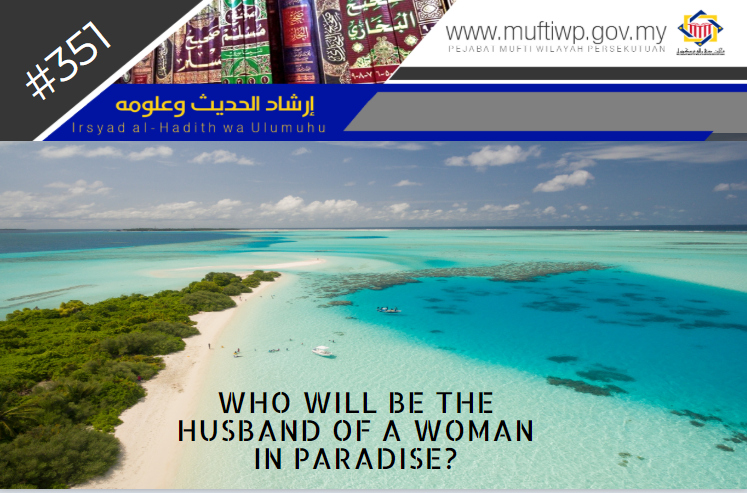 Assalamualaikum wrm.wbt. Who will be the husband of a woman who had more than one husband?

According to the above question, there is a hadith narrated by Ummu Salamah R.Anha:

“There are women among us who married once, twice, thrice and four times. Then she passes away and is placed in Paradise and her husband will enter it with her. Who (from among her husband) will be her husband (in paradise)? Then the Prophet PBUH said: “O Ummu Salamah, she (the wife) will be given a choice and she will choose the one with the best character.”

Imam al-Thabarani said this hadith is not narrated from Hisyam bin Hasan except Sulaiman bin Abi Karimah. Thus, ‘Amr bin Hasyim is tafarrud (alone) in narrating this hadith. (See al-Mu’jam al-Awsath. 279/3). Furthermore, Imam al-Haithami said that one of the narrators in the sanad of this hadith; Sulaiman bin Abi Karimah is evaluated as dhaif (weak) by Abi Hatim and Ibn ‘Adiy. (See Majma’ al-Zawaid, 119/7). Besides, Imam Ibn al-Jauzi evaluated this hadith as unauthentic. (See al-‘Ilal al-Mutanahiyah, 161/2)

Among other narrations which mention this issue is the story of Mu’awiyah bin Abi Sufyan who wanted to ask for Ummu al-Darda’s hands for marriage after the death of Abu Darda’:

“Any woman whose husband dies and she remarried afterwards, then her husband in paradise is her last husband she married.”

Imam al-Haithami said in the sanad of this hadith there is Abu Bakar bin Abi Mariam and he is a narrator who has confusion on his memorizations (weak memory). (See Majma’ al-Zawaid, 270/4) Imam al-Suyuthi evaluated this hadith as dhaif (weak). (See al-Jami’ al-Saghir, 358/2)

There is another narration related to this issue which is a story of Ummu Habibah narrated by Anas bin Malik RA, where Ummu Habibah said:

“O Messenger of Allah! If a woman had two husbands in this world, which is a husband she married after her first marriage and all of them enter Paradise. Who will be her husband (in Paradise)? The Prophet PBUH replied: Her husband will be the one who is the best in character.”

The following is among the narrations which explain the related matters in this issue and none of these narrations are free from criticisms by scholars and hadith scholars.

For this, we would like to summarize as stated by scholars that this issue is divided into several opinions and scholars have differing opinions in determining this issue:

Imam al-Suyuthi tried to harmonize all these narrations by stating that a woman (wife) will be with her last husband if all of her husband were men of good character. If this is not so, then the woman will choose the one with the best character. (See al-Jami’ al-Saghir, 262/1)

In this issue, we are inclined to tawaqquf for the evidence which mentioned this issue is not strong except for the hadith which narrated the story of Ummu al-Darda’ which is the strongest in term of its authenticity. Furthermore, this matter is included in the matters of the unseen for it involves paradise. Thus, it is best to hand it to Allah and this is the opinion which is issued as the fatwa by Syeikh ‘Athiyyah al-Saqar.

In short, every individual regardless whether it is a man or woman should strive to be the best husband or wife for their spouse in this world so that we will be placed in Paradise. As for the matters related to the paradise, then we should hand it completely to Allah SWT and the only thing that we can do is to increase our supplications so that Allah SWT will put us together with our wife and the pious people in the hereafter. Lastly, may Allah SWT include us and all our family members as the people of paradise in the hereafter. Amin.