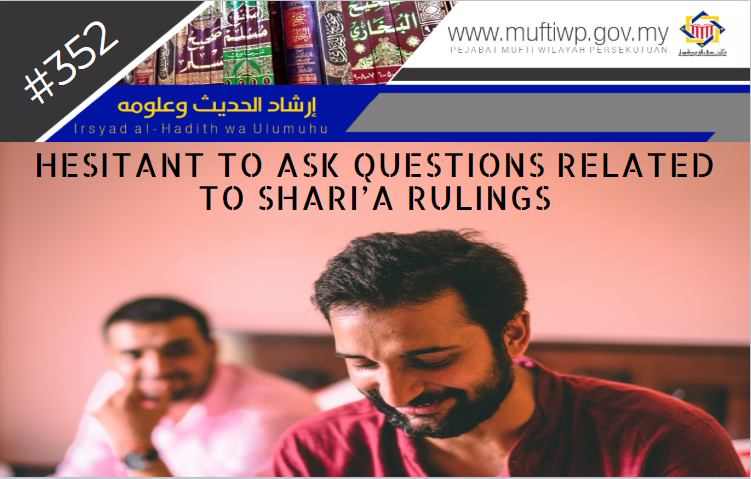 Is there a hadith that states that the Companions were hesitant to ask questions about a certain Shari’a ruling because they were shy?

Shame is one of the commendable attributes from the branches of faith as stated in a sahih hadith:

“…modesty, bashfulness, and scruple, etc.) is a part of faith.”

Syeikh Mustafa al-Bugha when giving commentary on this hadith said shamefulness (modesty) is an attribute of a human and this attribute encourages humans to do commendable deeds and leave what is disgraceful and contemptible. According to the above question, there is a hadith narrated by Saidina Ali bin Abi Thalib RA who said:

I used to get the emotional urethral discharge (pre-seminal discharge/ madhy) frequently so I requested Al-Miqdad to ask the Prophet (ﷺ) about it. Al-Miqdad asked him and he replied, "One has to perform ablution (after it)."

Imam al-Bukhari placed this hadith under the chapter “A shy person asking another to ask on his behalf.” Thus, from this hadith we can understand and extract several wisdoms or lessons from it as the following:

To conclude, shamefulness (modesty) is included as commendable attributes and a symbol of the perfection of a person. However, in the context of education or asking questions related to a certain religious matter then the attribute of shamefulness should be set aside for the religion commanded it as so except if there is a debilitation that prevent us from asking and make it so that we have to ask another person to ask it on our behalf. Moreover, there are also a statement from a renown tabi’in scholar, Imam Mujahid who said:

“Knowledge can never be attained by the shy and arrogant.”

Lastly, may Allah SWT make us from among His slaves who are shameful to commit sins towards Him. Amin.