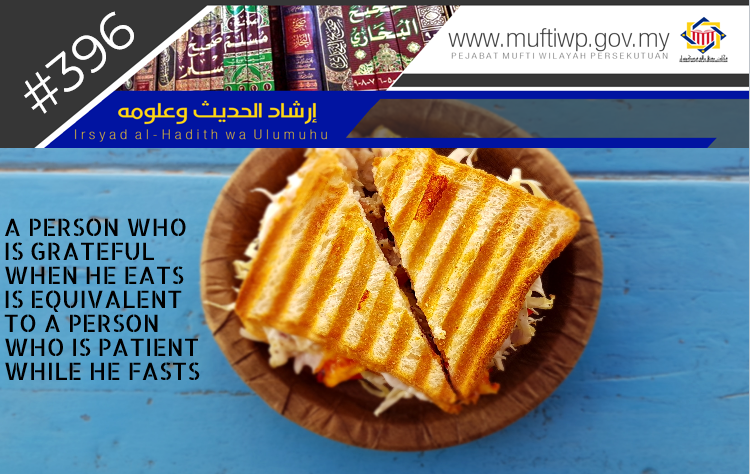 Is there an athar from the Prophet PBUH which states the status of a grateful person when he eats is equivalent to a person who is patient while he fasts?

The Prophet PBUH stated numerous advantages for a person who fasts. The reason is, everything that is sanctioned by Allah SWT has its own apparent and hidden wisdoms behind it. Furthermore, the Prophet PBUH always fasts on Mondays and Thursdays as stated by his beloved wife:

"The Prophet used to try to fast on Mondays and Thursdays."

According to the above question, there is a hadith that narrates the status of a person who eats and is grateful is the same as a person who is patient while he fasts:

"The one who eats and is grateful is like the status of the patient fasting person."

Reviewing this hadith, Syeikh al-Talidi said what is meant by the one who eats is a person who rarely fasts. As for the meaning of who is grateful are people who fulfil the rights when he is eating such as praising Allah SWT and utilizing his ability on the path of obedience towards Allah SWT. Thus, he will be rewarded by Allah SWT. Furthermore, what is understood from the status is the rewards that he will be rewarded with. While for the meaning of a patient fasting person is a person who often fasts and is patient with the hunger, thirst and others. Moreover, the hadith also mentioned the advantages of a wealthy person who is grateful with a poor person who is patient. (See Jawahir al-Bihar, 1/473)

Al-Qari said, the least we could do to be grateful is to recite bismillah when we are starting to eat and alhamdullillah when we have finished eating. As for the least level of patience is by protecting himself from anything that harms (invalidate) his fasting. Besides, al-Muzahhar said the comparison is regarding the rewards that a person will receive from Allah SWT. (See uhfah al-Ahwazi, 7/160). Furthermore, the literal meaning from the hadith is the equivalence in term of the rewards is both have the right to be rewarded. (See Hasyiah al-Sindi, 4/25)

To conclude, the hadith that narrates the status of a person who eats and is grateful is the same as a person who is patient while he fasts is hasan and both of them have a right to be rewarded by Allah SWT. This also shows the advantages for those who are grateful with all the blessings of Allah SWT and who are always patient in performing worships. Lastly, may Allah SWT accept all our worship and make us from among the people of paradise. Amin.