IRSYAD AL-HADITH SERIES 400: VYING IN THE CONSTRUCTION OF MOSQUES 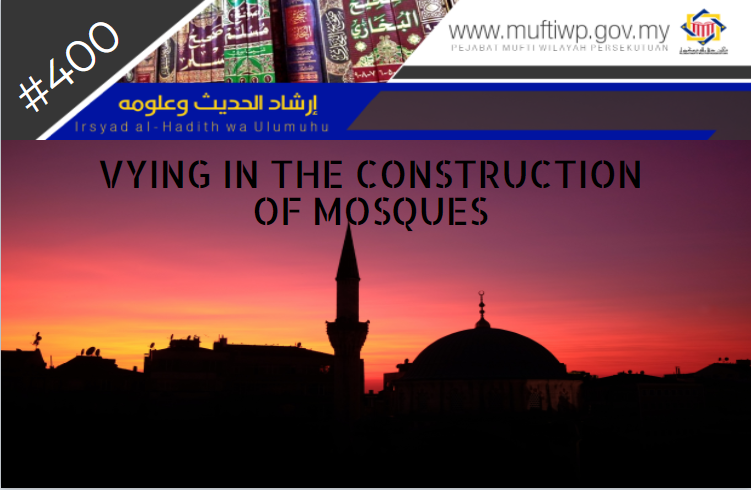 Is there a hadith which states that among the signs of the Last day is when people compete in the construction of mosques?

“The Last Hour will not come until people vie with one another about mosques.”

The hadith state that people will compete with the construction of their mosques saying that our mosque is more beautiful, big, tall, great with feelings of riyak, sum’ah (love to hear) and look for praises. Ibn Ruslan said the hadith is a miracle of what is revealed to the Prophet PBUH in the future after the Prophet PBUH’s death. Furthermore, beautifying and competing in the construction of mosques is a norm in our world today. (See: ‘Aun al-Ma’bud, 2/84)

Moreover, what has been told by the Prophet PBUH is already happening today where the costs in building a mosque reached millions of ringgits, while if it is built according to how the Prophet PBUH used to built mosques, then tens of thousands of mosques could have been built. (See: al-Sahih al-Musnad min Dala’il al-Nubuwwah. 590)

In this issue, we are inclined to state that building huge and beautiful mosques is not a problem for it is showcasing the eminence and honour of Islam itself. Furthermore, the need and maslahah of a society and place should be considered. It should not be built with the purpose of competing or boasting against each other which is prohibited and this is what is meant in this hadith.

To conclude, competing in the construction of mosques is one of the signs of the Last day as stated in the above hadith. Besides, the sign is already apparent and it is happening in our time which shows that the Last day is nearing us. This is explained by Imam al-Nawawi when he commented on the hadith:

“I and the Last Hour have been sent like this and (he while doing it) joined the forefinger with the middle finger.”

Lastly, may this short explanation give us understanding and we pray that Allah SWT save us and make us from those who are protected from fitnah and the trials in the end of times. Amin.