IRSYAD AL-HADITH SERIES 414: DU’A (SUPPLICATION) OF A MOTHER FOR HER CHILDREN IS THE SAME AS DU’A OF A PROPHET FOR HIS UMMAH 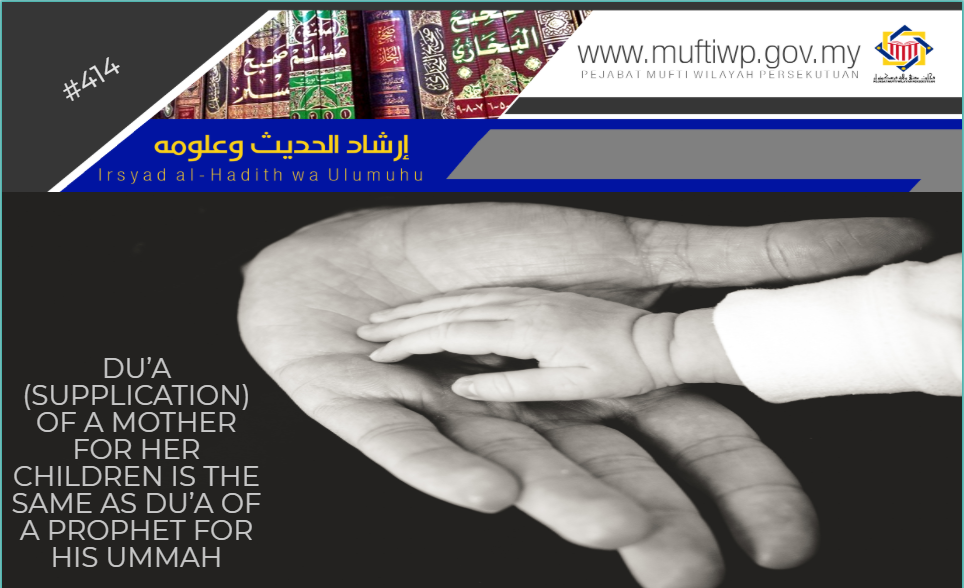 Is it true that some speakers in masjid told that there is a hadith which states that a du’a of a mother for her children is of the same position as du’a of a prophet for his ummah?

Du’a is the weapon of the believers and it is indeed a special act of worship as it links a servant to his Creator, Allah SWT DIRECTLY. We as believers shall always make du’a because a man is full of weaknesses and always in need of his Creator at all times and places. Allah SWT also calls for His creations to seek for Him by making du’a as stated in the Quran:

And your Lord says, "Call upon Me; I will respond to you.

Moreover, children are valuable assets for parents. They are the adornment of this worldly life. This is based on a Quranic verse that says:

Wealth and children are [but] adornment of the worldly life.

Referring to the above question, we would like to present first the hadith meant which is that a du’a of a mother for her children is of the same position as du’a of a prophet for his ummah:

Narrated from Anas bin Malik RA, it is said that the Prophet PBUH said:

The following are the scholars who analyze the statement along with their commentaries:

Nevertheless, the du’a of parents for their children is a form of du’a which is accepted or granted. This is in accordance with a hadith narrated by Imam Ibn Majah:

Duties and Responsibilities of a Believer

As a believer who upholds love towards the Prophet PBUH, we should always preserve his name and stature; his dignity and his honor from any accusation and fabrication by others. This is the symbol of our love towards him as stated in his PBUH saying:

Meanwhile, it is also part of our obligations before we read, write, teach or convey any hadith of the Prophet PBUH to the public to verify them first as well as seek for its source and status. The reason is, if we claim something as the saying of the Prophet PBUH where it is all a lie, then it is feared to be included in this warning. By doing this, it is a way to preserve the sanctity of the religion as well as shielding it from those who intend to break it.

To conclude, among the signs of Allah’s mercy and gracefulness upon us is when He bestow some supplications that are mustajab for us. Hence, it is our responsibility to supplicate more. Lastly, may Allah SWT group us among His servants whom supplications are always accepted and may Allah always protect our tongue from telling lies against the Prophet PBUH. Ameen.