IRSYAD AL-HADITH 425: HADITH ON THE VIRTUE OF MEMORIZING ONE HADITH 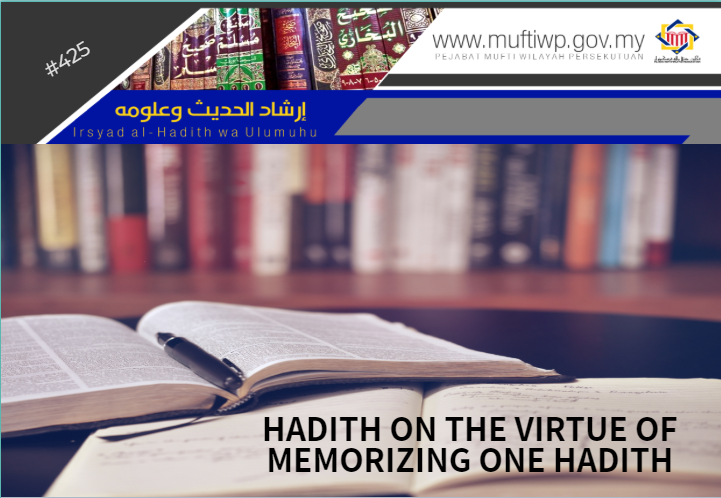 Is there any hadith which emphasizes the virtue of memorizing one hadith and that the reward is equivalent to what is given to the prophets AS?

As a Muslim, we are held responsible by Allah SWT to convey and spread His religion according to our own capabilities. This is because the duty of da’wah is a duty of the past Prophets AS as well as our beloved Prophet Muhammad PBUH. Besides, the most important thing in da’wah apart of relaying the message of the Quran is the spread of the saying of the Prophet PBUH to all mankind. This is in accordance with what is told by the Prophet PBUH himself which is:

Syeikh al-Mubarakfuri upon commenting on this hadith said that this hadith calls us to convey a verse of the Quran even if it is short. This hadith may also be understood as the Prophet PBUH’s call to convey his sayings. [Refer: Tuhfah al-Ahwazi, 7/360]

Referring to the question asked, we would like to cite first the text of the hadith meant in the question:

“Whoever among my ummah memorizes a hadith, then for him is the reward of the 71 true Prophets”

Among the scholars who evaluated this hadith are:

Referring to the above opinions, we are also of the view that the stated hadith is not sahih and it is prohibited (haram) for us to spread it except with the purpose of explaining that it is a fabrication. There is also a hadith which emphasizes on memorizing 40 hadiths through various narrations. However, Imam al-Nawawi as well as the huffaz of hadith view that the hadith is weak (dhaif) although it is narrated through various narrations. This can be found in Mukadimah Imam al-Nawawi in his book Hadith 40. [Refer: al-Wafi fi Syarh al-Arbain al-Nawawiyyah, 8]