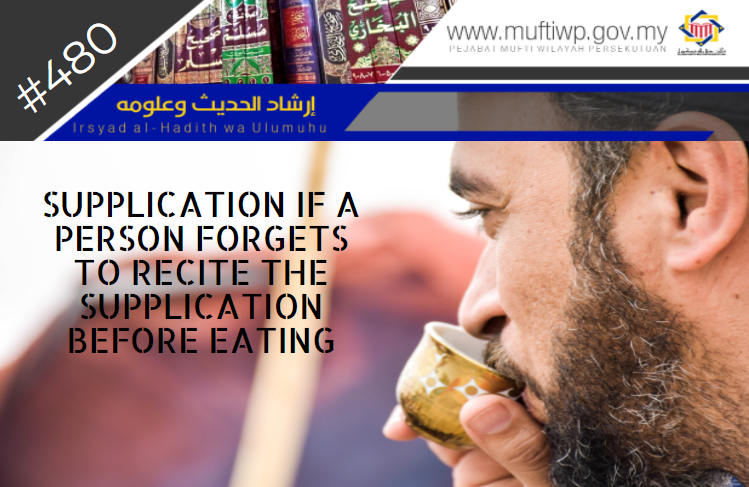 Is there a supplication taught by the Prophet PBUH if a person forgets to recite the supplication before he eats?

As a believer, we should always supplicate to Allah SWT for the attribute of a human is weak and always in need of his Creator in every situation and time. Thus, numerous du’a were taught by the Prophet PBUH to us for us to recite in our everyday lives so that we will have a blessed life.

According to the above question, there is a hadith narrated by Imam Abu Daud related to a supplication for a person who forgets to recite the supplication before eating.

Furthermore, in Sahih Ibn Hibban, he cited another narration from Abdullah bin Mas’ud, where the Prophet PBUH said:

Imam al-Munawi stated that although the hadith only mentions about the act of eating, it also includes drinking. Furthermore, this supplication can also be recited after eating or drinking. (See Faidh al-Qadir, 1/296)

The above hadith is sahih and there is syawahid (supporting hadith) for it. Moreover, scholars state that it is sunnah to start every writing, learning, teaching, khutbah, speech and others (such as eating and drinking) that is considered as important with praise for Allah SWT. (See al-Majmu’, 1/73)

To conclude, let us all pray to Allah SWT in every matter that we do so that it will be blessed by Allah SWT. Lastly, may Allah SWT give us the strength to practise the sunnah of our beloved Prophet PBUH. Amin.