IRSYAD AL-HADITH SERIES 482: THE STORY OF BILAL’S FOOTSTEPS IN PARADISE 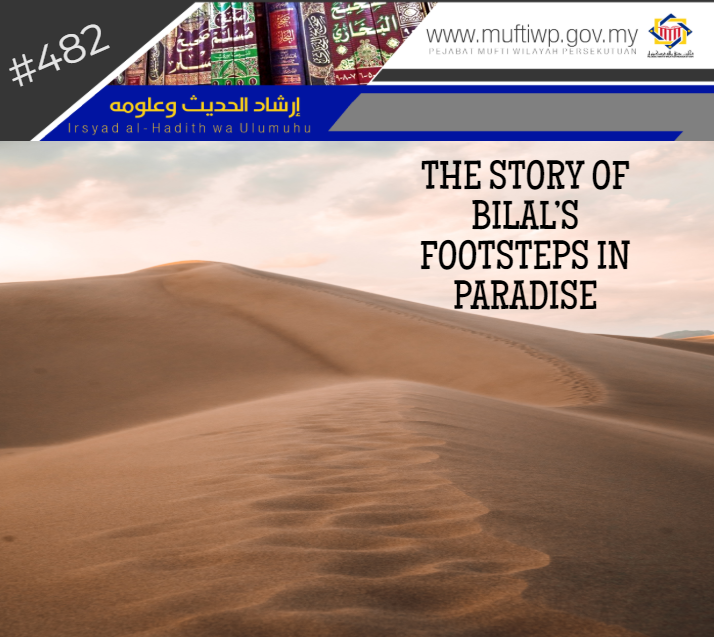 What is the status of the story of Bilal’s footsteps in the Paradise?

Besides, it is also stated in the Quran that Allah SWT is pleased with the Companions and Allah SWT prepares for them gardens of which beneath it rivers flow:

And the first forerunners [in the faith] among the Muhajireen and the Ansar and those who followed them with good conduct - Allah is pleased with them and they are pleased with Him, and He has prepared for them gardens beneath which rivers flow, wherein they will abide forever. That is the great attainment.

Coming back to the above question, the story of the Prophet PBUH heard the footsteps of Bilal in the Paradise originated from a sahih hadith. Among them is what is written by Imam al-Bukhari (256H) in his Sahih:

"Tell me of the best deed you did after embracing Islam, for I heard your footsteps in front of me in Paradise." Bilal replied, "I did not do anything worth mentioning except that whenever I performed ablution during the day or night, I prayed after that ablution as much as was written for me."

Among matters that can be taken from this hadith is stating the time of worship (specifying a time for certain worship) is permitted because Bilal had done so based on his own deduction, which then is acknowledged by the Prophet PBUH. [See: Fath al-Bari, 3/34]

This hadith also becomes the dalil of the commandment to perform Sunnah prayer after completing ablution. This is also mentioned by Imam Ibn al-Jawzi when he stated that this hadith indicates the encouragement of performing prayer right after taking ablution to fulfil its purpose. [See: Fath al-Bari, 3/34]

Besides, this action of Bilal bin Rabah is in line with the Sunnah taught by the Prophet PBUH through his hadith:

Anyone performs ablution and performs the ablution perfectly and then offers two rak’ahs of prayers concentrating on them with his heart and face but paradise will necessarily fall to his lot.

In conclusion, the story of the Prophet PBUH heard the footsteps of Bilal RA in the Paradise is a sahih story and it shows the high position of Bilal RA as he preserves and practices the Sunnah taught by the Prophet PBUH. May this brief explanation give us an understanding of the science of hadith. Lastly, may Allah SWT give us understanding in this religion so that we may practice it. Ameen.