IRSYAD AL HADITH SERIES 499: THE MEANING OF ‘ALL THE COMPANIONS ARE JUST’ 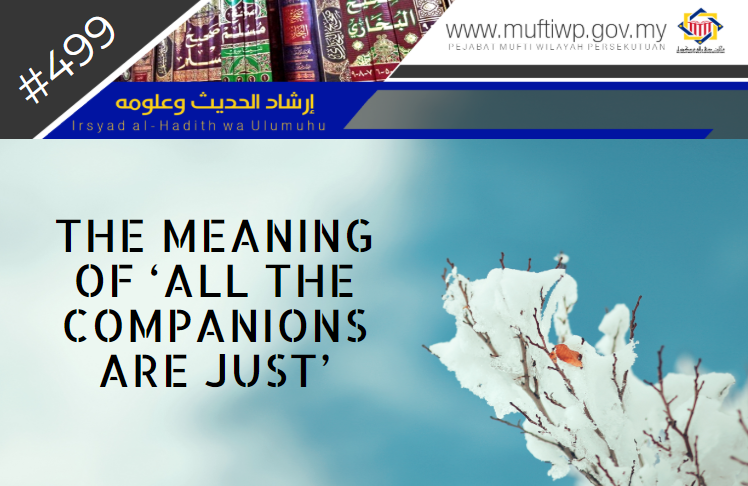 Assalamualaikum, as we all know, all companions of the Prophet PBUH are just and honest, in the aspect that their narrations are automatically accepted. However, I’m perplexed, if this is so then why does there is a narration which state that there are among the Companions who committed major sins such as fornication? While the attribute of just and honest is someone who did not commit major sins and are not in continuous minor sins? Hope for an explanation.

The Honour of the Companions R.ANhum

Besides, in the Quran, it is stated that Allah SWT blessed the Companions and promised them a place in Paradise where rivers flow beneath them:

“Certainly, was Allah pleased with the believers when they pledged allegiance to you, [O Muhammad], under the tree, and He knew what was in their hearts, so He sent down tranquillity upon them and rewarded them with an imminent conquest.”

"Do not abuse my companions for if any one of you spent gold equal to Uhud (in Allah's Cause) it would not be equal to a Mud or even a half Mud spent by one of them."

The just and honesty of the companions of the Prophet PBUH are agreed by scholars and it is only contradicted by groups other than Ahlussunnah such as Syiah and Muktazilah. (Refer Ma’rifah al-Thiqat by Imam Abu al-Hasan al-‘Ijli 1/93). The statement always made by scholars are:

Just in Narration and Just in Terms of Suluk / Conduct

“When Ma'iz bin Malik came to the Prophet (in order to confess), the Prophet (ﷺ) said to him, "Probably you have only kissed (the lady), or winked, or looked at her?" He said, "No, O Allah's Messenger (ﷺ)!" The Prophet said, using no euphemism, "Did you have sexual intercourse with her?" The narrator added: At that, (i.e. after his confession) the Prophet (ﷺ) ordered that he be stoned (to death).”

A researcher of contemporary sirah, Dr Muhammad bin al-Mukhtar al-Syanqiti explained that there is a misunderstanding in differentiating between two terminologies:

According to him, ‘adalah al-sohabah (the justness of Companions) meant by scholars especially in the field of hadith refers to ‘adalah al-riwayah, in other words they are known to never lie on the name of the Prophet PBUH. The reason is the matter of lying on the name of the Prophet PBUH is considered as a grave transgression in the generation of the Companions, however, the generations that followed are indifferent, thus, a stricter set of conditions are needed in determining the authenticity of a certain hadith.

“The justness of the Companions R.Anhum does not mean that it is thabit that they are free from transgressions and it is impossible for them to commit sins. However, the real meaning is that their narrations are accepted, their words are true and there is no need for it to be deliberated like the statement of others.” (Refer Tahqiq Munif al-Rutbah li Man Thabata Lahu Syarf al-Suhbah, pg. 86)

“All the Companions – R.Anhum – are people whose words are the truest and it is not known that any of them would purposely lie on the Prophet PBUH’s name.” (Refer Minhaj al-Sunnah al-Nabawiyyah 2/456) (Refer Al-Khilafat al-Siyasiyyah baina al-Sohabah, pg. 176)

However, one should be heedful that although some of the companions would slip and commit a sin, they have the advantage where Allah SWT firms their hearts to immediately repent to Him for they are blessed because they are the companions of the Prophet PBUH. (Refer Mirqat al-Mafatih Syarh Misykat al-Masabih 4/1314)

In short, we would like to state that the meaning of all the companions of the Prophet PBUH are just is in terms of their narration, in other words, they would never lie or deceive on the name of the Prophet PBUH and they are from the most truthful and honest of people.

The Companions R.Anhum are not free from committing sins, however, their mistakes and sins do not affect their honour and standing as the best of generation for this ummah. Furthermore, it does not abrogate their justness for their sins and mistakes are immediately followed by repentance to Allah SWT. The reason is their status are clearly guaranteed by Allah SWT in numerous verses of the Quran and thabit through the acknowledgement of the Prophet PBUH himself.