IRSYAD AL-HADITH SERIES 186: NARRATING A HADITH BY ITS MEANING 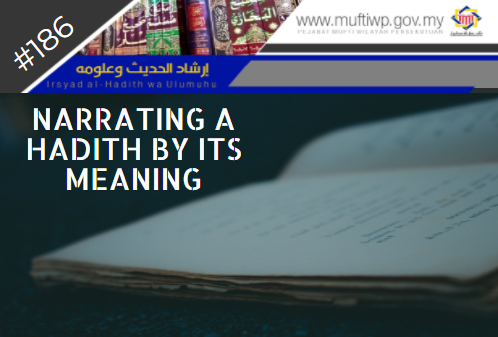 What is the ruling of narrating a hadith by its meaning?

It is generally known that the best of people are those who always give benefit to others. This is because, the best of words are words of calling other people towards good deeds and prevent them from evildoings. This is stated in al-Quran by His SWT saying:

And who is better in speech than one who invites to Allah and does righteousness and says, "Indeed, I am of the Muslims."

Even if the ruling of narrating hadith by meaning is an issue with differing opinions among the scholars, but the jumhur permits it while the person must comply with the conditions set. Among the conditions are: [See: al-Minhaj al-Hadith, 58]

In addition, Imam al-Suyuthi cited in his book that jumhur from salaf and khalaf including the imam of 4 madhhabs permit narrating hadith through its meaning. [See: Tadrib al-Rawi, 314]

In conclusion, narrating a hadith by its meaning is permitted when a person fulfils the above condition. There is one other thing which is commanded to be fulfilled and is not a condition because it is more towards ethics which is saying something ‘exactly the same as what is mentioned by the Prophet PBUH’ after narrating a hadith by its meaning. Lastly, may Allah SWT give us understanding in the religion and then reside us among the people of His everlasting paradise. Ameen.