IRSYAD AL-FATWA SERIES RAMADHAN EDITION 134: HOW TO DETERMINE THE TIME TO BREAK ONE’S FAST WHILE TRAVELLING IN AN AIRPLANE? 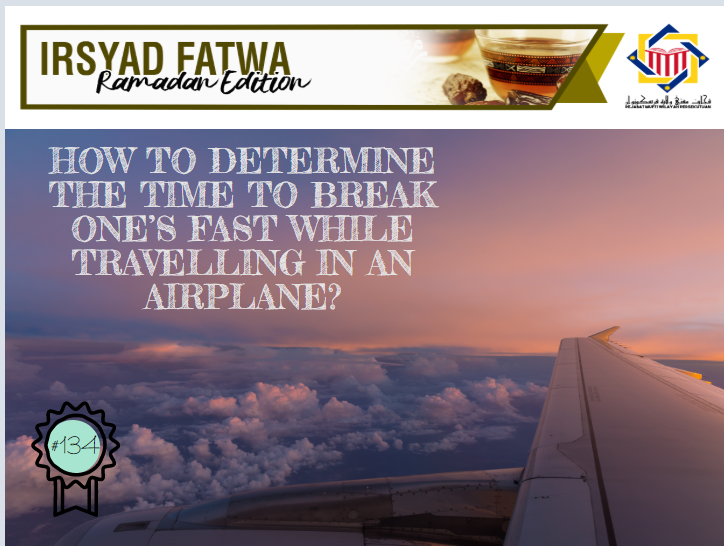 Assalamualaikum SS Dato’ Seri, I am a businessman who often travels in and out of the country. I choose to fast even while I’m travelling in this month of Ramadhan. My question is, when should I break my fast; am I supposed to follow Kuala Lumpur time zone, or the time zone of the place I am heading to, or the country in which the airplane is currently passing?

In answering the question, we stated here a verse from the Quran that comes after the verse of the commandment of fasting.

“[Fasting for] a limited number of days. So whoever among you is ill or on a journey [during them] - then an equal number of days [are to be made up]. And upon those who are able [to fast, but with hardship] - a ransom [as substitute] of feeding a poor person [each day]. And whoever volunteers excess - it is better for him. But to fast is best for you, if you only knew.”

Imam al-Tabari upon commenting on this verse stated that whoever is included in the term ‘mukallaf’, but is sick or travelling, then it is permissible for him to break his fast and replace it on the other days after the passing of Ramadhan. Refer Jami’ al-Bayan fi Takwil al-Quran (2/138).

Hence, as stated above, the Shari’a gives freedom for those who are travelling to choose either to break their fast or continue fasting.

The next question is related to the time of breaking fast for those who choose to continue fasting; either it is according to a country they are coming from, or the headed country, or the one which the airplane is currently passing. In this issue, it is important for us to understand Allah’s saying in the Quran:

“Then complete the fast until the sunset”

According to this verse, it can be understood that the time for breaking fast is when the sun sets. This matter is made clear by the hadeeth narrated by Saidina ‘Umar bin al-Khattab RA, in which the Prophet PBUH said:

“The completion of fasting is by the setting of the sun as being agreed upon all Muslims”. Refer al-Majmu’ (6/304)

This matter was also mentioned by Egypt’s Dar al-Ifta’ in answering the question of people breaking fast in the air, stating that:

Hence, it is clear that the time of breaking fast is in accordance with the current location of the one who fasts. Neither according to the place he was coming from nor a place he is heading to even if the time is displayed accurately in the airplane.

As for that, the one who fasts should observe the time and make sure that the sun clearly sets. The jurists even explained the methods of determining the night time on certain situations especially when the airplane passes a region in which the sun is unseen. This is explained by Ibn Daqiq al-‘Aidh:

“And the location (of the one who observes the sun sets) is different. If there is a hindrance between the person and the sun rays, then it is not enough to only observe the disappearance of the sun from its horizon, (the person hindered should) take into account the signs (of reaching Maghrib prayer time) by observing the coming of the night time from the east.” Refer Ihkam al-Ahkam (1/166)

Referring to the above evidences and judgements, we would like to state that the time of breaking fast for those in airplanes is referred to the night time seen by their own eyes or what is announced by the flight attendants according to the current time. It is important to be assured by our own eyes that the sun has set and the day has turned into night.

May we always be in His guidance in practicing this religion. Amen.