BAYAN LINNAS SERIES 23: THE ETHICS OF CELEBRATING EID AND ITS OMISSIONS 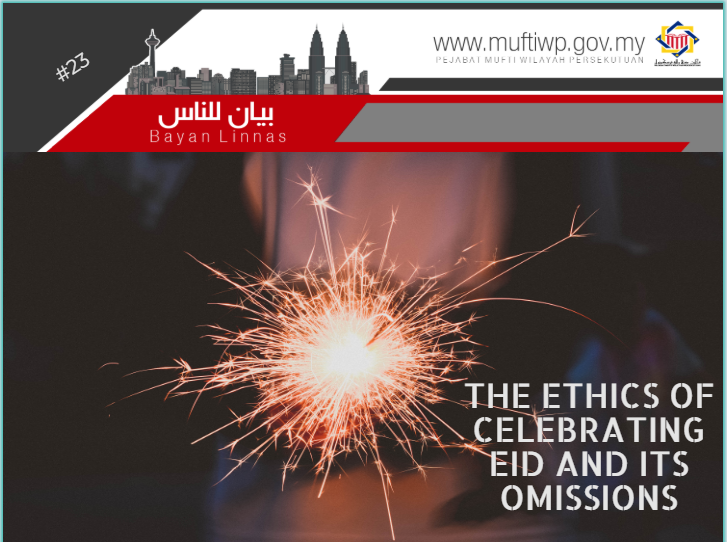 First and foremost, we would like to say Happy Eidul Fitr, وَكُلُّ عَامْ وَأَنْتُمْ بِخَيْر تَقَبَّلَ اللهُ مِنَّا وَمِنْكُمْ, and may Allah reward us with taqwa, so that we may express our gratitude for the blessing of guidance Allah has blessed us all with. And also for the air we are blessed with as well as our ability to still be able to breathe. Alhamdulillah for all of that.

In conjunction with the celebration of Hari Raya, we would like to offer an article of Bayan Linnas entitled The Ethics of Celebrating Eid and Its Omissions as a guidance for us in our current situation, so that we are not misguided and stay in this path of Allah’s blessing even though we are happy and celebrating.

The Ethics of Celebrating Eid

Among the ethics of celebrating Eid are:

On the Day of `Id the Prophet (ﷺ) used to return (after offering the `Id prayer) through a way different from that by which he went.

"The Prophet went out on the day of Al-Fitr, so he prayed two Rak'ah, then he did not pray before it nor after it."

Omissions on the Ethics of Celebrating Hari Raya

We would like to highlight some omissions on ethics in which they are against the Sunnah of the Prophet PBUH, especially when we are busy enjoying the celebration. Among the omissions are:

Being Happy on Hari Raya

It is common to be happy with the coming of Eid for all of the Muslims around the globe, for the efforts of doing obligatory as well as Sunnah act of worship.

The answer here, what is the ruling of enjoying oneself and how does it supposedly done?

The scholars already discussed this issue in a lengthy discussion on entertainment and games permitted by the Syara’. Enjoying and entertaining oneself with permissible acts are permitted, indeed it is even encouraged especially on the day of Eid.

Generally, as long as the entertainment or games does not lead to the negligence of a Muslim from his responsibilities, then they are permitted. This is the general condition need to be observed when one is enjoying himself by some games or other entertainment.

Another condition is the games should not lead to sin or are mixed with prohibited acts like drinking alcohol, gambling, mixing around between non-Mahram men and women, and entertaining to the extent of quarreling and fighting between one another.

“The Ethiopians played around the Prophet PBUH on the day of Eid. Then, I put my chin on his shoulder (to have a better view of the people) while enjoying the play until I felt satisfied, then left (from there)”

“Abu Bakr came to my house while two small Ansari girls were singing beside me the stories of the Ansar concerning the Day of Buath. And they were not singers. Abu Bakr said protestingly, "Musical instruments of Satan in the house of Allah's Messenger (ﷺ) !" It happened on the `Id day and Allah's Messenger (ﷺ) said, "O Abu Bakr! There is an `Id for every nation and this is our `Id."

Allah's Messenger (ﷺ) came to my house while two girls were singing beside me the songs of Bu'ath (a story about the war between the two tribes of the Ansar, i.e. Khazraj and Aus, before Islam.) The Prophet (ﷺ) reclined on the bed and turned his face to the other side. Abu Bakr came and scolded me and said protestingly, "Instrument of Satan in the presence of Allah's Messenger (ﷺ)?" Allah's Messenger (ﷺ) turned his face towards him and said, "Leave them." When Abu Bakr became inattentive, I waved the two girls to go away and they left. It was the day of `Id when negroes used to play with leather shields and spears. Either I requested Allah's Messenger (ﷺ) or he himself asked me whether I would like to see the display. I replied in the affirmative. Then he let me stand behind him and my cheek was touching his cheek and he was saying, "Carry on, O Bani Arfida (i.e. negroes)!" When I got tired, he asked me if that was enough. I replied in the affirmative and he told me to leave.

Hence, let us all celebrate Eidul Fitri or Hari Raya while adhering to the ethics set by Islam. Don’t ever fill this festivity with wastage and excessive entertainment. In fact, all entertainments are permitted, but in obeying the true procedures set by this religion.

Ibn Rajab al-Hanbali said in his book Lataif al Minan: “Eid is not by (merely) wearing new clothes, but Eid is for those who increase their obedience to Allah.”

Statements of the Mufti of Federal Territories

We start this statement with a du’a تَقَبَّلَ اللهُ مِنَّا وَمِنْكُمْ. May Allah accept from us and you for all worship that we did. In this country, we would like to state some matters as the perfection of the ethics of celebrating Eid. Some of them are:

I would like to take this opportunity to ask for forgiveness from all individuals and I also sincerely forgive all wrongdoings upon me. May Allah make our hearts clear and filled with diligence, sincerity, and mahabbah of love between us. Ameen.

To close, I would like to remind myself as well as my fellow friends to care for the orphans, poor, elders, sick persons and the mustad’afin so all of them be taken care of and are concerned from us who are blessed by Allah with some wealth.

Based on the syari’ah Islamiyyah through the Sunnah nabawiyyah, it is clear how Muslims should act and behave in the midst of happiness and celebration after successfully passing the worship of fasting as well as other Sunnah act of worships in the month of Ramadhan. After a month of hard work and determination of worships, Allah SWT blesses us with the coming of Syawal as a sign or our victory in hard work and consistency in worships. However, this victory should be filled with gratitude and the way it is done is by reciting takbir as a praise of the One and Only God while strengthening the silaturrahim by strengthening the ukhuwwah Islamiyyah.

In this context, we are told to build two strong ties which are hablum min Allah (relationship with Allah) and hablum min annas (relationship with other humans). When these ties are strengthened, surely there will be lots of good outcomes and peace among the community. As a result, the sins of the servants are forgiven, families become happy to the extent of it is eligible to be entitled to baiti jannati, the community could grow harmoniously, and the relationships between them are strong without any prejudice. Above all, the country or the state which they live in together is entitled to Baldatun Toyyibatun wa Robbun Ghafur.