AL-AFKAR #92: IS IT POSSIBLE FOR THE SOULS OF THE DEAD TO HARM THE LIVING? 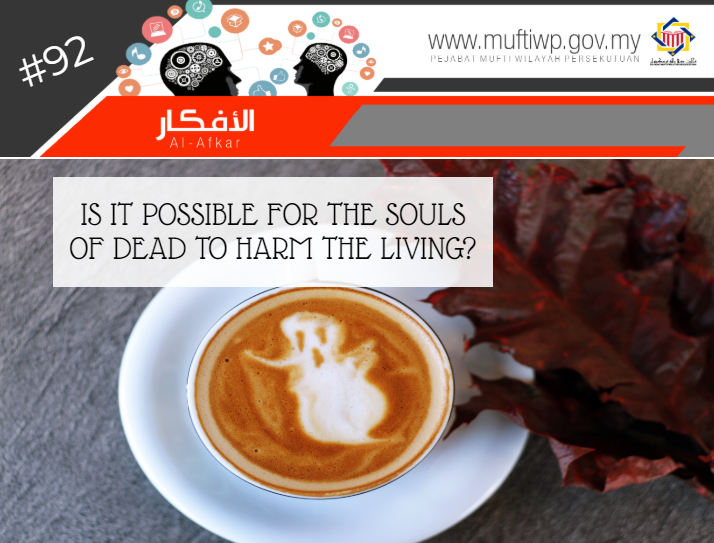 Assalamualaikum. Hopefully, you are always healthy. I have one question. Is it true that the miserable souls of the dead will come back and haunt or harm the living? The reason is there are some people who believe that if a person dies before achieving his wishes, then he will come back to haunt the living until he fulfils it. Hope for an explanation.

The first thing we would like to state is that the fact that souls are under the knowledge of Allah SWT. What is mentioned by Allah in the Quran and said by the Prophet PBUH in the hadiths are our stand. This is in accordance with the saying of Allah SWT in the Quran:

And they ask you, [O Muhammad], about the soul. Say, "The soul is of the affair of my Lord. And mankind have not been given of knowledge except a little."

Imam Fakhruddin al-Razi when commenting on the verse states that Allah SWT wants to explain that man’s intellect is limited and thus, he is unable to know more on the souls. (Refer Mafatih Al-Ghaib, 21/31)

Imam Jalaluddin al-Mahalli and Imam al-Suyuti said that this verse clearly stated that the matter of the soul is under the knowledge of Allah. It is better for us to not go deeper in researching about the soul. (Refer Tafsir Jalalain, pg 378)

Pertaining to whether dead people are able to return to this world, this question should be answered by al-Quran and Sunnah. It is closely related to the unseen which requires supporting proof from the revelation. Allah SWT says in the Quran:

Allah takes the souls at the time of their death, and those that do not die [He takes] during their sleep. Then He keeps those for which He has decreed death and releases the others for a specified term.

Briefly, the souls of the dead shall not return back to the world. We already discussed more on this in some of our previous articles. Among them are:

Coming back to the question presented, since the souls of the dead cannot return to this world, hence, they also cannot disturb and harm the living. Even more so to cause injury and others. What is portrayed by society and some films that the dead will return and seek revenge and others are something absurd and merely superstitious. They are in fact the shapeshifting and portrayal of jinn and shaytan to deviate human beings. In fact, shaytan and jinn are unable to cause harm to humans.

This is stated in the saying of the Prophet PBUH where he said:

There is no ghoul

Imam al-Nawawi said that a ghoul is a form of shaytan in which it is believed that it can change into many forms and is able to cause harm. This belief is refuted by the Prophet PBUH. (Refer Al-Minhaj Syarh Sohih Muslim, 7/375).

In fact, when we look closer to the verses of al-Quran, we can see that verses clearly state that there is a barrier between this world and the world of the dead which is named as the barzakh. Allah SWT says in the Quran:

That I might do righteousness in that which I left behind." No! It is only a word he is saying; and behind them is a barrier until the Day they are resurrected.

Ibn Kathir when commenting on the phrase barzakh mentioned in the verse, he cited several opinions of the scholars. Among them is Mujahid, who stated that barzakh is a wall between this world and the hereafter. Muhammad bin Ka’ab said that barzakh is a realm between this world and the hereafter. Those who pass away do not live with the living and it is not at a place like the hereafter where one is rewarded by the paradise and hellfire. (Refer Tafsir Al-Quran Al-‘Azim, 3/311).

This shows that those who have already died are kept back from returning to this world in a place named barzakh. If the souls of the dead are able to return to this world, then surely Allah will return them back when they plead to Allah to bring them back to life.

In conclusion, the souls of the dead shall never return to this world, or even to disturb and harm the living. This kind of belief as mentioned before is an absurd belief and a superstitious.

May Allah protect us all from shirk and nonsense superstitions. Wallahua’lam.