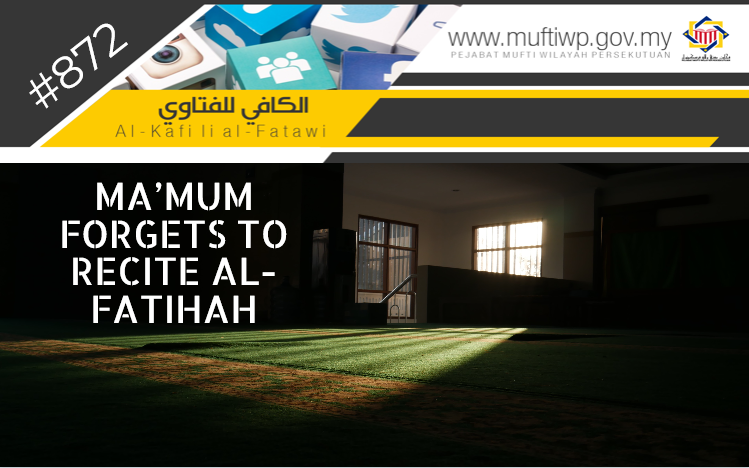 What is the ruling for when a ma’mum forgets to recite Fatihah when he performed the congregational prayer?

Answering the above issue, if it is because of his forgetfulness, then it is not a problem. However, one should consider for how long did he forget. If he remembers when the imam is in rukuk (bowing in prayer), then he has to recite the Fatihah until the maximum of three long requisites of prayer he is permissible to leave. [1] Which means when the imam is performing the second sujud (prostration), then it is wajib for him to follow the imam again.

In madhhab al-Syafi’e, it is based on understanding the sahih hadith of the Prophet PBUH in various narrations. Among them, a hadith narrated from ‘Ubadah bin Somit RA, the prophet PBUH said:

"Whoever does not recite Al-Fatiha in his prayer, his prayer is invalid."

The same is stated in a hadith narrated from Abu Hurairah RA, where the Prophet PBUH said:

“He who said his prayer, but did not recite the opening chapter of al-Kitab, his prayer is incomplete. He repeated it thrice.”

“The majority of scholars’ opinion is that it is wajib to recite al-Fatihah behind the imam whether it is a sirr (soft recitation) or jahr (loud recitation) prayer.” (See al-Majmu’ Syarh al-Muhazzab, 3/365)

Reciting al-Fatihah is wajib for both the imam and ma’mum. For the ma’mum, it is further divided into two.

If it is a masbuq ma’mum, recite the Fatihah until before the imam perform rukuk. When the imam bowed for rukuk, even if the recitation is not complete, he has a right to follow the imam according to the following prophetic evidence:

“…bow down when he bows down,”

Whereas for muwafiq ma’mum, he has to complete his recitation of al-Fatihah. As for if he prays alone, it is wajib for him to recite al-Fatihah. This is the opinion in madhhab Imam al-Shafie Rahimahullah.

Once again, we would like to affirm that the recitation of al-Fatihah is wajib for imam, ma’mum (except for masbuq ma’mum) and a person who prays alone.

May Allah SWT grant us understanding in obeying His every commandments and avoiding His prohibitions. Amin.

[1] Imam al-Nawawi stated in al-Majmu’, a ma’mum is given a facilitation to not follow the imam for three long requisites of prayer in certain situations, which means a ma’mum has to bow before the imam raise up from his second sujud (prostration) to stand or get up from tasyahhud. (Refer al-Majmu’ by Imam al-Nawawi)