AL-KAFI #1056: UPLOADING OLD PHOTOS OF ONESELF FOR #10YEARSCHALLENGE 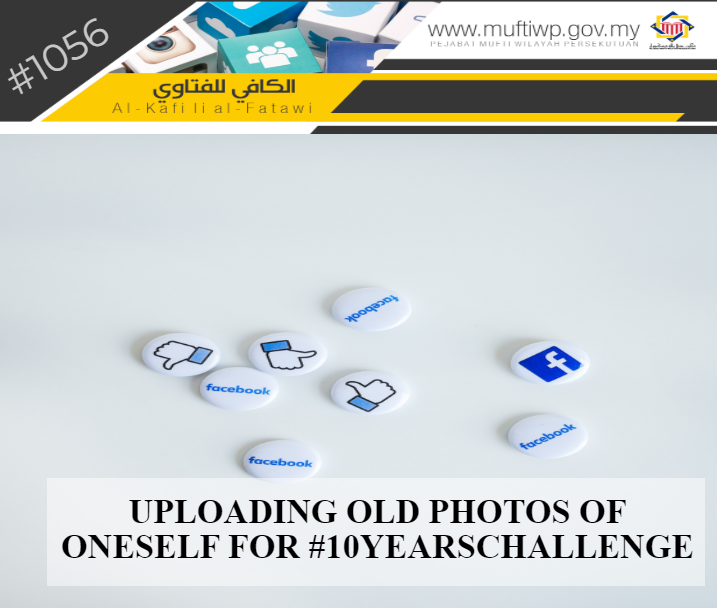 What is the ruling of uploading non-covering awrah photos (old pictures) for #10yearschallenge?

Since this is a contemporary issue, we view that printed pictures or digital ones can be analogically deduced (qiyas) to the ruling of objects reflected by the mirror or water which was discussed by previous scholars.

In this issue, Imam al-Ramli when commenting on the opinion of Imam al-Nawawi in al-Minhaj said: It is haram for a man who has reached puberty to see the awrah of free ajnabi women, but it is not haram if it is just an image or photo reflection. So, it is not haram to see the awrah through the mirror as what is ruled by some scholars because it is not considered as seeing the awrah directly. However, this permissibility is applicable as long as there is no fitnah. (See Nihayah al-Muhtaj, 6/187). This is also stated by Sheikh Abu Bakr al-Dimyathi in I’anah at-Thalibin, 3/301.

In our opinion, in this issue, it is important to determine first whether the photos are captured when one is already mumayyiz or before. If he is not mumayyiz yet, we are inclined to state that its ruling is permissible as long as it does not lead to fitnah. While for those who have are already mumayyiz, then it is haram. This is because, uploading non-covering awrah photos for the #10yearschallenge that has gone viral is not a need and only for fun.

It is not included in the exception and flexibility discussed on 21st May 2018 in IRSYAD AL-FATWA #227: THE RULING OF UPLOADING NON-COVERING AWRAH PHOTOS IN SOCIAL MEDIA. Besides, wara’ and cautious should be prioritized. The there is a high risk for the old pictures which does not cover the awrah (even one has already covered his or her awrah now) to lead to fitnah. So, this is the base of its prohibition through the method of sad al-zari’ah which is blocking the permissible that leads to the prohibited.

This is also in accordance with other Fiqh maxim which says:

“Whatever leads to the haram is haram,”

This is also in accordance with a maxim:

“Beware of the means towards accusations.”

This maxim is taken from the words of Sayyidina Ali RA:

“Whoever takes the path towards accusation will be accused.”

Whatever that has a risk of leading to fitnah should be avoided with all our might because it will produce a negative outcome in the short or long term.

Still, any photo which can be manipulated for bad purposes should be considered wisely before it is uploaded. Especially nowadays where there are possibilities of danger like issues related to child predator and paedophiles.