AL-KAFI #1362: IS IT PERMISSIBLE FOR A MUSLIM TO LEAVE HIS PROPERTY TO A NON-MUSLIM IN HIS WILL? 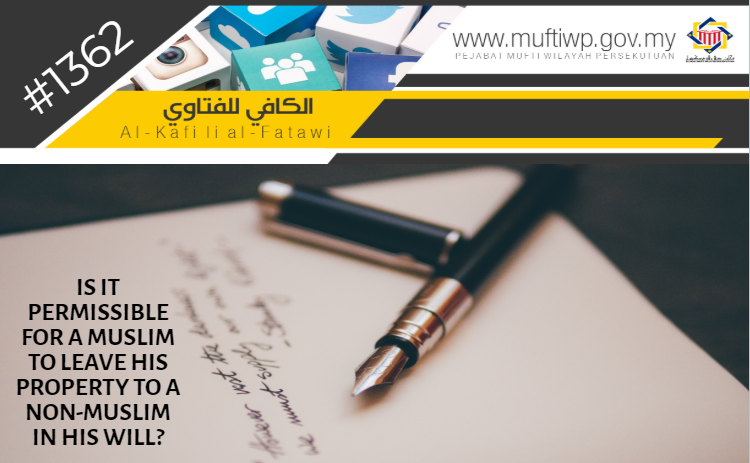 Assalamualaikum Datuk, I want to ask regarding my father’s will where he left his motorcycle to his non-Muslim neighbour. Is this permissible?

Property planning and management is encouraged in Islam. Thus, will is one of the initiatives in the implementation of financial system in Islam.

The condition for a will is stated by Syeikh Muhammad al-Zuhaili in his book:

A hadith from Saad bin Abi Waqas, he said:

"O Allah's Messenger (ﷺ)! May I will all my property (in charity)?" He said, "No." I said, "Then may I will half of it?" He said, "No". I said, "One third?" He said: "Yes, one third, yet even one third is too much. It is better for you to leave your inheritors wealthy than to leave them poor begging others,"

Conditions of the Recipients of a Will

As for the issue of leaving one’s property to a non-Muslim through a will, it is permissible, the same as donating or giving gifts to non-Muslims. Syeikh Muhammad al-Zuhaili said in his book:

“It is permissible and valid to leave one’s property to the zimmi, al-Mu’ahad, harbi or apostate the same as donating or giving gifts to them.”

It is on the condition that it is not for the purpose of sin such as enlivening churches, writing Bible and Torah and reciting them, writing deviant philosophies and deviant teachings, regardless whether it is to Muslims or non-Muslims. (See al-Mu’tamad fi al-Fiqh al-Syafi’e, 4/543-547)

Coming back to the above question, it is permissible to leave one’s property in his will to non-Muslim that he knows and has specified with the maximum amount of a third from the inheritance on the condition that it is not for sinful purposes. This is stated in al-Mausu’ah al-Fiqhiyyah:

This is as stated by Allah SWT in the Quran:

“When a man dies, his acts come to an end, but three, recurring charity, or knowledge (by which people) benefit, or a pious son, who prays for him (for the deceased).”

May Allah SWT give us goodness and correct understanding in His commandments and bless us with strength to practise it. Amin.