IRSYAD AL-HADITH SERIES 6: DHA’IF (WEAK) HADITH: THE RULING OF PRACTICING AND USING IT AS HUJJAH 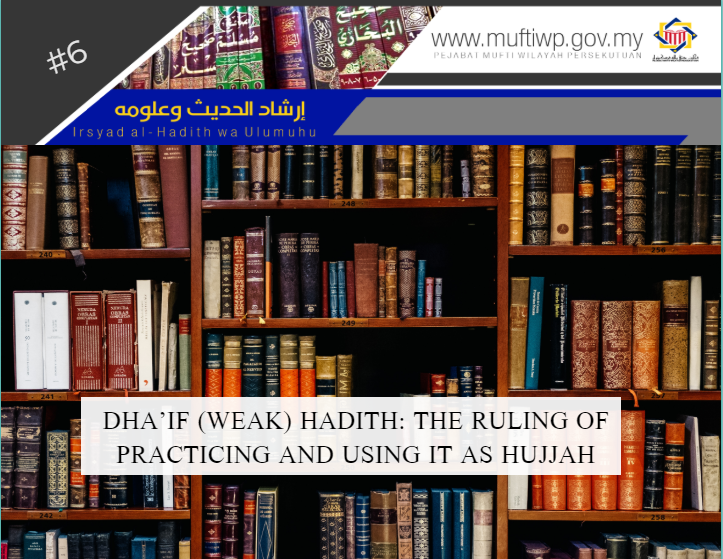 What is the ruling of practising dha’if hadith? Can it be practised in an absolute manner or are there certain conditions in doing so?

The issue of whether it is permissible to practice and use dhaif hadith as hujjah has become a polemic among scholars. Hence, we state the following:

The Definition of Dha’if Hadith

It can be divided into two which are light dha’if whereby the status may be elevated to become hassan lighairihi (حسن لغيره) by the presence of syawahid (الشواهد) or mutaba’at (المتابعات) and heavy dha’if which martabat may not be elevated. [See: ‘Ulum al-hadith Asiluha wa Mu’asiruha, 162]

Among the reasons of hadith becoming heavy dha’if is when scholars of hadith categorized the hadith as such due to loss of ‘adalah (العدالة) in one of the narrators or more.

After learning the definition, then we should see the scholars’ opinions on the issue of practicing them or using them as hujjah:

The scholars have differing opinion on stating whether dha’if hadith is permitted to be used as a hujjah on rulings or practiced in fadhail al-‘amal (benefits of practices) or otherwise. [See: Syarah al-Manzhumah al-Baiquniyyah, 64-66]

First: Dha’if hadith is a hujjah in an absolute manner on two conditions:

This is the opinion of Imam Abu Hanifah, Imam Malik bin Anas, Imam al-Syafi’e. Imam Ahmad and many more.

Second: Dha’if hadith cannot be practiced or used as hujjah in ruling matters and fadhail al-‘Amal. This is the opinion of Yahya bin Ma’in, al-Bukhari, Muslim, Ibn Hazm and many more.

Third: Dha’if hadith may only be practiced in fadhail al-‘Amal and cannot be used as hujjah in rulings. This is the opinion of majority of the scholars, but they set some conditions to practice dha’if hadith. Among them are:

Tarjih: After analysing the opinion of the scholars on this, we are inclined towards the permissibility to practice dha’if hadith, but at the same time it is followed by certain conditions or dhawabit (guidelines) as stated by the jumhur (majority of the scholars) in the third opinion. This is also the opinion of Imam al-Nawawi RA and Mulla ‘Ali al-Qari.

Lastly, may Allah SWT give us the correct understanding in practising all practices so that we will be in line with what Allah SWT and the Prophet PBUH want. Ameen.